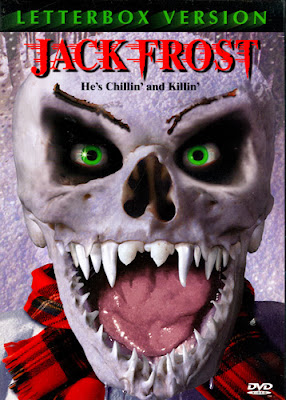 Happy Christmas from The Rotting Zombie to everyone. Now after doing a spoof review of Home Alone the other day I felt I just had to watch an actual Christmas horror. Films such as Black Christmas and Gremlins are ones I considered but went with the fun Jack Frost. Not to be confused with the Michael Keaton family film of the same name that came out a year after this.

Jack Frost (Scott MacDonald) is a serial killer who is being transported by prison van to his place of execution a week before Christmas when a blizzard causes the van to accidentally crash into a lorry carrying an experimental genetic formula. Jack becomes exposed to the acidic formula causing his DNA to somehow meld with the snow near his melting body turning him into a living snowman; a living psychotic snowman who can freeze and unfreeze his body at will. Jack sets out to slay the local populace of the small mountain town he finds himself at. 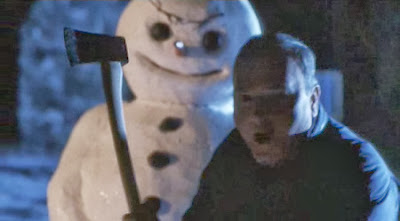 There is no way that a film about a killer snowman could go down the straight and serious route and thankfully Jack Frost doesn't attempt that. The snowman in the best tradition of comedian slashers (later Freddy Kruger, the Leprechaun etc) is always causing his deaths in inventive ways with a wise crack never far from his icy lips, and as with those films it is the kills that keep you glued to the screen. Frost is the classic snowman shape; 3 balls of snow one on top of the other, coal for eyes, and a carrot for his nose.

The formula is as you would expect, the first half of the film no one even knows he is there, the small town Sheriff; Sam (Christopher Allport) knows there is a killer no the loose but has no idea what he is dealing with. F.B.I Agent Manners knows exactly what is going on but will not say. Halfway through Frost begins his rampage for real, no longer hiding in the shadows. There is quite a high body count and some iconic death scenes contained. A woman who gets her face smashed into a box of Christmas baubles before being wrapped around a Christmas tree with lights, a man who gets an axe shoved down his throat handle first, and the girl who is having a bath when the bath water forms into Frost, all great scenes. 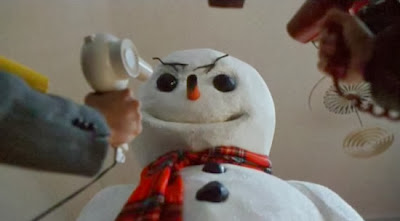 The script is funny and doesn't take itself seriously, though sometimes the story goes a bit haywire with ridiculous plot devices that don't make sense. Frost is afraid of hot things so at one point the survivors decide to flood a hallway with hair and bug sprays to...warm up the air or something? And then the only exit out the corridor is locked so they all start to choke on the spray? All leads to a senselessly dramatic sequence that felt really dumb, Some of the acting also is not great, the Sheriff's child in particular did my head in, could not stand any scenes that awful kid was in.

The special effects are not the best, Frost does not look like he is made of snow, and anytime he moves it is shown only from the waist up, and the melting and reforming sequences happen just off camera, still despite a couple of false ends the film doesn't outstay it's welcome. A fun, very silly horror that is well worth a watch as a solid Christmas horror. Followed by a sequel that I recall as being truly abysmal.

Posted by Daniel Simmonds at 01:05

I have to LOL at the people melting him with blowdryers~!