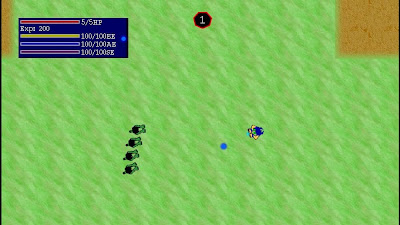 First off the usual stuff. This is an X-Box Indie game and as such I am reviewing this based on the demo. Sometimes I will hold  back on reviewing until I have played the full game but Heroes vs. Zombies is one game I am sure does not get any better.

You and up to 3 friends are in charge of a grave-less graveyard. It is your job to ensure no zombies escape from the graveyard to the outside world. That is it for the story, I could have come up with a better one. You seem to have magical powers as you fire balls of energy from your hands.

The title screen was enough to put me off, it has a drawing of a zombie that looks like it was done on MS Paint, this terrible artwork carries on over into the game. Heroes vs. Zombies is an overhead arena based zombie survival game that is very lazy. You kill waves of zombies (and turtles for some reason) getting points with which to get better weapons. There are no sound effects other than the dull thud your energy ball things make and the soundtrack consists of one eternally looping rock dross thing. A very basic, dull game that was zero fun to play.