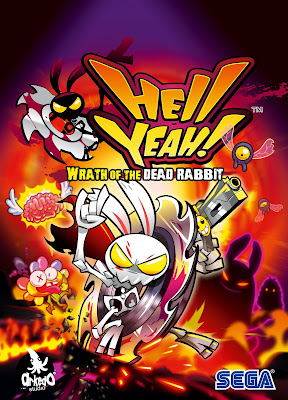 Hell Yeah! Wrath of the Dead Rabbit is a game published by Sega, full of bright colours, and solid cartoon graphics. At it's core it is a mild platformer punctuated by many boss fights.

Ash the Dead Rabbit has recently inherited his fathers role as the Ruler of Hell, however not long after this happens some revealing pictures of Ash in his bath playing with a rubber duck get leaked onto Hell's version of the internet. Before he is able to get the pictures removed 100 inhabitants of Hell have managed to view the pictures. Not wanting his evil image to be ruined he sets out to find and kill everyone who has seen him with his duck. 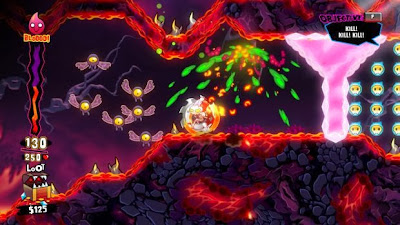 Hell Yeah! is a bizarre game in that you are placed in huge open levels, yet there is not a lot of enemies in them at all, the game is more a series of boss battles, hunting through the levels to locate the demons marked on your map. When I was a child I designed in a notepad a platform game that was just boss battles, so am glad a game such as one I thought of has finally been made! Most the game you are riding a strange contraption that consists of a motorised spiked wheel armed with various weapons such as rocket launchers, lasers, and miniguns. This vehicle can be used to grill through rock in the levels and upgraded to return to earlier areas to drill through rock that used to be impenetrable in a mild Metroidvania way. Certain sections have you heading off on foot which make you defenceless and so must change your tactics to kill your foes (eg: pushing a block to crush a target, or luring one to stand under a switch activated acid shower.

There are quite a few areas of Hell to go through, all have fantastic music. The traditional Hell appears as a lava filled level, but space, night club, museum, post apocalyptic and others all appear, full of bright colours and looking great. The best would either be the psychedelic level, or the super cute one in which a super irritating upbeat song is sung in the background. 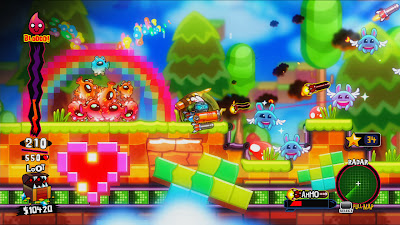 With a hundred bosses I expected to be bored quickly but each is wonderfully brought to life, not only in the game world, but also appearing in a bestiary with a short description when they are defeated. It is really quite interesting with a lot of variety given, even if you do get the occasional block of identical looking characters (3 different astronauts in a row spring to mind). The bosses are relative to the areas they appear in, so the factory level has lots of robot demons, while the night club area has party themed demons for instance. Towards the games end you find from one description that the demons appearances are based on the last thoughts and images they saw before they died on Earth which made me look at them all in a different light..

The actual battles are for the most part very brief, none of them have large energy bars, all are defeated via an over the top finisher that is usually very gory, albeit in a cartoon way. These finishers include a horde of rats that appear to eat the victim, a huge buzz saw slicing up the victim, even being booted across the world into a football goal and then sliced up when hitting the back of the net. While these finishers are a lot of fun and require some simple QTE presses they do on occasion repeat which was a slight shame. There are also a few larger fights that feel like more traditional boss fights, these usually end with a slice of story. 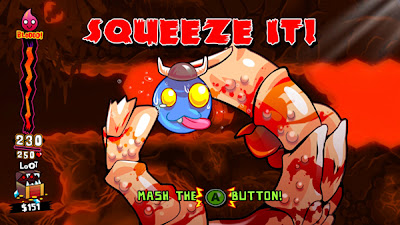 The plot is quite bare bones, I was excited to get to the end to find out just who was behind the photos but when I found out I was very disappointed, not a good reveal at all and made me end on a bit of a downer. Also Hell Yeah! is a very easy game, this did not bother me though as it mostly such a joy to go through.

Really my main complaint is just how poorly the whole thing finished, and that maybe the main boss battles could have been more inventive and tougher. There are plenty of hats to buy in the shops you encounter, challenges to complete, as well as a bizarre mini game in which you set the killed demons to work on your resort island which provides some excuses to revisit but overall there is not too much reason to be dragged back. A fun game while it lasted with a great style.

Posted by Daniel Simmonds at 10:47