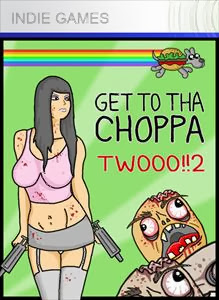 From So So Dev comes the sequel to the endless runner game GET TO THA CHOPPA!!1. I wasn't sure what they could do to make it feel any different, and basically they don't. Maybe more refined.

This time around you play as a woman running for her life from thousands of zombies instead of a man. Much like before you have a Uzi to fire at zombies ahead of you, and you must jump over land mines and duck under missiles a following helicopter fires at the horde chasing you. What's new is that sometimes presents are given to you from the helicopter which makes you invincible for a short while. 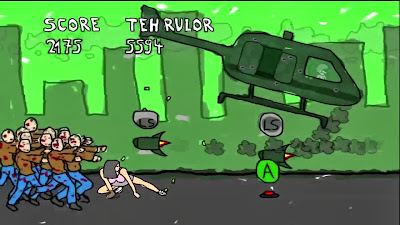 Not much to say really, the same game as before with added power ups. A great hand drawn visual style, a catchy tune playing, but kinda pointless if like me you own the first game. I like that the obstacles all have giant button prompts next to them. Is just an endless runner, a competent one but to be honest when you've played one you have played them all. At 65p it is very cheap though.

Posted by Daniel Simmonds at 05:01