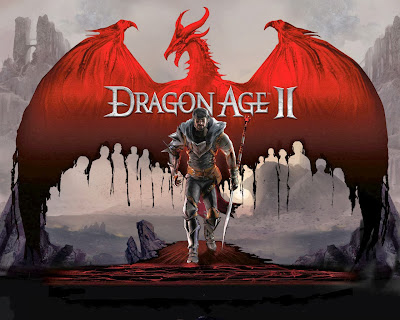 I picked up Dragon Age II  a year or so back for under a tenner, yet due to both having a glut of RPG's to play, and remembering negative mumblings about the game at its release I put off playing it. While it is indeed a very fun game it near buckles under a wealth of near inexcusable flaws.

Dragon Age II takes place over around 7 years, split into 3 chapters, it starts with you as either a male or female rogue, warrior, or mage named Hawke escaping the Blight (a huge event from Dragon Age: Origins) with your family and heading to the far off city of Kirkwall. During your time in Kirkwall nothing overly massive seems to happen, there is no grand over arching plot about the end of the world, mainly it focuses on the growing division between the Circle of the Magi and their monitors; the Templar order led by over zealous Knight Commander Meredith. The whole game takes place via the recollection of a Dwarf named Varric who is being interrogated about Hawke in the present by a Seeker for reasons unknown. 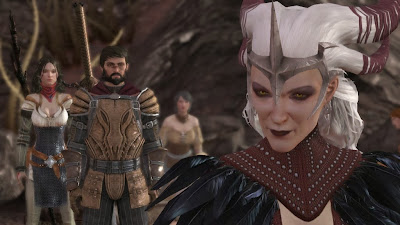 I found Dragon Age II to be a fun, solid game. The amount of side quests is commendable, there are a heck of a lot over the games 40 plus hour run time. These side quests for the most part do not tie in much to the main storyline but some reoccurring ones (such as hunting a serial killer at large in Kirkwall) do have great repercussions. Each of the games 3 acts has its own swab of side quests with your actions in these coming back to haunt you in later acts. Now my first issue I will talk about is these quests. At the end of Act 1, and at the end of Act 2 before starting the final mission you get a warning to mop up any outstanding business as nothing carries over. Because of this I got into the last part of the game not realising it was the end as I had received no warning. As a result there were quite a few side quests I never got to finish as I was too far in by the time I realised to go and load up an old save that would have set me back an hour. I do not know why there was no warning.

As mentioned there is not too much dramatic plot going on, mostly Dragon Age II chronicles Hawkes rise from an immigrant no one to being a key player in Kirkwall. The end section of the game literally stuffs you into a big story out of nowhere, I was forced to choose between two different sides which I found unfair as both sides were heavily flawed so was not happy to have to do this. There were some cool twists in the story I did not see coming, this included key characters dying, and character turns. 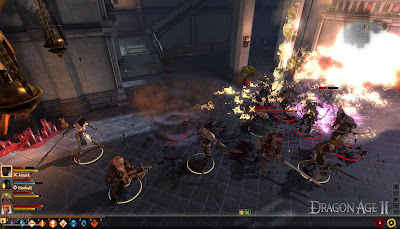 The characters were the best thing about Dragon Age II. Some are worse than others but I just used the ones I liked the most. Hawke is able to be moulded to be as ruthless or as nice as you want, this doesn't really change much but you get to decide characters fates (such as deciding whether to kill a criminal, let them go, or get them arrested for instance). My companions (you can have 3 with you at once out of a pool of around 7 included nervous Dalish Elf Merril, no nonsense Guard Captain Aveline, and my favourite; roguish Pirate Captain Isabella. Characters talk amongst themselves as you wonder around with lots of unique conversations. Dragon Age: Origins included a War Hound as a playable character, this time around I was pleased that the Hound was again included but this time available as a special weapon being able to be summoned to help you fight (kinda bizarre having a teleporting dog though!). Much like Origins you can form romances with your party members with your character not restricted to being heterosexual.

Now my main bone of contention is how lazy and rushed Dragon Age II is. I believe the game was rushed out by EA in just over a year and if this is true it would explain the shocking lack of variety in locations you visit. It mostly takes place in the city of Kirkwall with only a few areas being outside the city but the key crime comes with the reuse of dungeon templates. There are only around 7 or 8 different dungeon designs and they pop up over and other again. Sewers, caverns, warehouse, houses all have just the one design meaning each new place you get to you have already seen. They have the exact same layout, the exact same scenic furniture, and while some areas get blocked off to create the illusion of a new place the map itself is still whole;  this is a very big issue and is great at completely destroying immersion. It is pathetic, lazy, and frequently had me laughing out loud at the disbelief that anyone thought this would be a good idea. All I can imagine is that there was not enough time to make varied locations so the level designers just thought to themselves "f**k it, no one will notice". 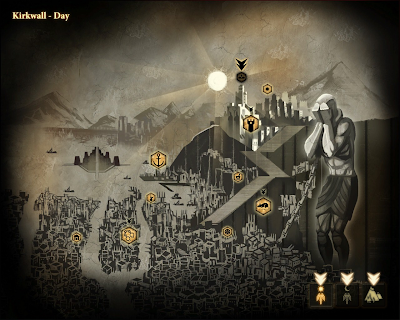 People complained about the simplified more action based combat system, but for me (someone who had to play Origins on easy) I welcomed this more streamlined system. Special attacks are linked to the face buttons and I had no problem using potions and switching between characters in the heat of battle. You are only able to change Hawkes armour, other characters have special armour that unlocks at key points in the story. For the most part all you are fighting are humanoid enemies (Elves, Humans, and Dwarfs mostly), the other main enemies being demons. I enjoyed the combat but more variety would have been welcome in what you fight. I found the many boss fights to be interesting and not unfairly hard.

Dragon Age II is a fun game, the world seems believable enough with lots of great back story provided, and it features plenty of shout outs to Origins. I really wish the level design had been more inspired and that there was a tonne more variety in the locations as this really was a big hurdle in my falling completely in love with it. If not for that issue I certainly could have seen myself giving this an 8, or even a 9 out of 10 but it is just so ever present that it could not but help get in the way of my enjoyment.