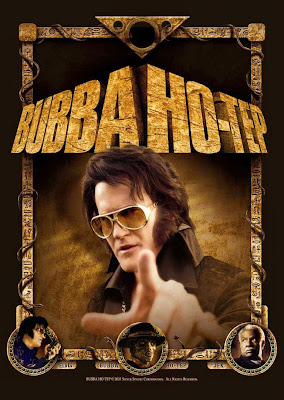 I was in need of a film to watch last night, I finally settled on Bubba Ho-Tep, having seen it once many years ago and remembering it as not being bad. The biggest draw for me for this film is the legend Bruce Campbell starring, that and it being directed by Don Coscarelli of Phantasm and Army of Darkness fame.

Campbell stars as Sebastian Haff; an elderly resident of The Shady Rest Retirement Home who may or may not be the real Elvis Presley (his story being that in the 1970's he got sick of all the drugs, women, and fame and swapped his identity with an Elvis impersonator). The residents of the home are dying regularly, the staff put this down to old age but Haff and his friend; the senile Jack (who himself believes he is JFK despite being black) discover that the abnormal amount of deaths is in fact due to a cowboy mummy who turns up at night to feast on the helpless souls of the old and sick. With no one to believe them it is up to the two old men to defeat the monster. 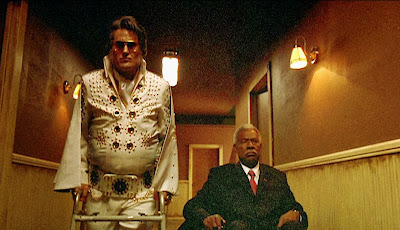 Campbell is fantastic as Sebastian/Elvis, he gives a real believability and vulnerability to the character, getting around via a zimmer frame, slow and laborious movements. His character narrates the film giving insight into his character and really make you as the viewer feel for him with his life time of regrets and his perspective on the young staff and visitors. The flashbacks to him in the prime of his life are very well done. Being the narrator it is never quite clear if he in fact was the real King or if he just thinks he is which was a nice touch. Ossie Davis as Jack is also a great side kick, his senile moments making his actions sweet.

Bubba Ho-Tep starts off bad, and does have some aspects that I thought were a bit off. Sebastian/Elvis talks about his privates far too much via narration, that and some toilet humour really fell flat for me, thankfully when the film gets going this fades into the background. It is a slow paced film and this is perfect as being set in a retirement home the whole atmosphere is one of slowness. Early action scenes feature a huge scarab beetle which looks quite fake but it is the arrival of Ho-Tep itself where the film becomes interesting. 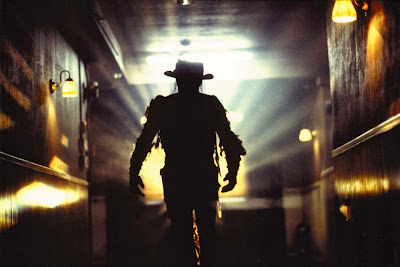 Bubba Ho-Tep's appearance as a mummy wearing cowboy clothes gives him a strange visual style, he has the ability to phase in and out of existence and gives no heed to the heroes due to their age. Ho-Tep is a lame bad guy in general terms as he is really not very powerful. The whole reason he is feeding off old people is due to being too weak to take on younger ones, so when the showdown finally commences it feels quite poignant in a way, a battle between the elderly  that no one else seems to care about. The mummy is quite immature and childish, an early bizarre clue to him being the cause of the dying old folks is some Egyptian graffiti scrawled on the wall of the visitors toilets, and when the mummy does talk his speech is translated as a slew of insults.

The soundtrack is mournful, and some genuine heart breaking moments occur with the frustrated old men powerless to stop the villain. This all leads up to a showdown that while light on action brings the film to a bittersweet end. Not the best review I have done, but there you go!