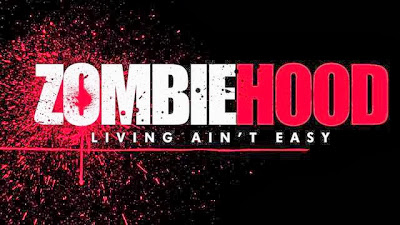 Zombie Hood was the second film I saw at the UK Festival of Zombie Culture 2013. This was filmed in Nottingham for an estimated budget of £7,000. I don't know if the title was a reference to the Kidulthood films but both feature angry, violent teens so it sure felt like it (switching on the brain for a moment though it is far more likely it is a play on Robin Hood). Guest blogger Lucinda will be giving her opinion after the review.

Zombie Hood starts off in a night club in Nottingham city centre where a girl assumed to have had too much to drink instead turns out to be a zombie; attacking other clubbers in the toilets before security arrive to deal with her and also get attacked. Olly Murs lookalike Rik (Richard Lee O'Donnell) rescues a girl and together they leave. Meanwhile the zombie outbreak is in full swing, all over the city people are turning into the walking dead. A disparate group of survivors including troubled teen Sam, creepy old man Bill, Police Officer Dermott, and a little girl among others decide the woods outside the city are the best place to hide out until help arrives.

The initial outbreak in a crowded night club was a good idea, I really enjoyed that part, but for me the later change of setting to woods (which I imagine was due to budget constraints more than anything) really dulled the experience. Having been to Nottingham it was fun to see a film set there, not so much some non-descript woods that could have been anywhere in the world is all I'm saying. Some allusions to Robin Hood what with the woods being Sherwood Forest and all, but still not exciting.

Onto dear old Bill (played by Harry Keeling). Now Bill is first found hanging out down an alleyway, most likely in a seedy part of town, he calls over a little girl and offers her sweets. This somehow gets him a pass to the wood hangout where he gains another girl "I gotta look after my girls!" to paraphrase one of his Bill-isms. After a request for more sweets when some of the survivors head off to a pub to have a hilarious desperate fight with some zombies over a box of crisps he then has an accident off screen in which he somehow hurts his bottom (never stated exactly what happened) and spends the rest of the film in a wheelchair conveniently brought back from the ill fated Battle of the Snacks. While his inclusion does outright stop Zombie Hood being a true horror it does make the film a joy to watch at times with the whole is he/isn't he paedophile sub-plot going on that is fun for the very reason that I am almost certain it was accidental. 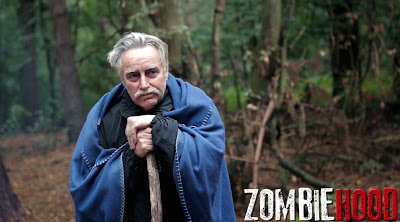 Other characters do not fare so well. For some reason there are far too many side stories going on. The film frequently goes to a new set of characters and follows them around for a bit before they usually end up getting killed. This just led to confusion for me, and I did get a bit lost with just who everyone was. A more focused tale would have worked better I felt. Bad boy Sam is just plain irritating, being a teenage criminal who does nothing to create any sympathy. He shoots at Policeman Dermott pretending to mistake him for a zombie, later tries to rape a character and still is almost welcomed back by the group when he next appears. Sometimes giving evil characters some depth to them works well but I gotta admit it is enjoyable seeing simple one dimensional bad characters getting their comeuppance.

Now it may sound like I was not impressed with this film but despite everything it works well as a zombie film. The zombies look and act like zombies and have a feel of danger to them and there are plenty of them, including zombie children which is always fun, and the make up for the zombies is pretty decent. The acting also was not bad for the budget, there were not really many terribly acted parts. I also liked how the film was split up by different times and days, a neat idea to give a sense of the progression of time. 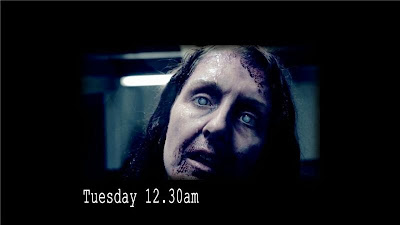 A lack of imagination for where the plot should go as well as the loss of identity thanks to what seemed like lots of unrelated tangential stories are what really made Zombie Hood lose it's impact with me, the characters meanwhile are what stuck for me, by turns realistic, one dimensional and just plain fun they made what could have been something awful into something that's simply not bad.

My honest opinion of this film is that I really struggle to remember what happened in it. I just didn't enjoy it that much, the saving grace was Bill; the guy you always suspected of being a paedophile. How bad does that sound? It's done in a very amusing way though. I'm not saying that I didn't feel for any of the characters either, as there were some cheers in the room when a not so nice character met a gruesome end (mine being one of the loudest!).
Posted by Daniel Simmonds at 13:31