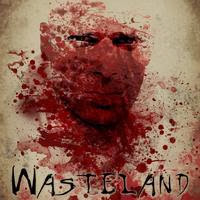 The fourth film to be shown at the UK Festival of Zombie Culture 2013 was Wasteland in its world premiere. Out of all the films this was the best one in my opinion. It was described as very bleak before hand but it does actually have a ray of hope shining through. It was made better by the fact the cast and crew were sitting a few rows down from me which was cool.

After zombie Armageddon starts in Britain Scott and the love of his life; girlfriend Beth head out to the remote countryside where they hole up in a shack hoping to escape the worst of it. Worried about her London based family Beth leaves on a mission to find out if they are ok. Holding on to hope that Beth will one day return Scott remains at the shack, his only contact with the outside world being a short range radio with which once a day he communicates with a fellow survivor. As long as there is a chance his love will return he will not leave the shack.

Wasteland was made with apparently a very low budget and is a character piece, mostly focusing on Scott Miller (played wonderfully by Shameer Madarbakus) and his day to day life scavenging for supplies. His clothes are in tatters, his home is in a terrible state, and he has to deal with the ever present threat of zombies even out in the middle of nowhere yet he has hope with much of his time spent reminiscing about Beth. This is shown via a series of flash backs that help break up the present and give you an insight into what his mindset is like.

For much of the 90 odd minutes running time it is all low key, Scott does battle zombies but he does not usually go out of his way to do so. His view being that people who try to be heroes die, there are a few action sequences though that do ramp up the excitement where he proves himself to be a capable foe of the undead when he has reason to. Other characters are few and far between, the majority undeveloped and sharing brief screen time. Scott's radio friend was my favourite, just a voice yet essential as a way to show Scott's inner thoughts without going into long monologues too often. Also the voice has a great little story of it's own going on that reminded me of audio diaries from horror videogames. Wasteland is clever in helping build up an impression of Beth as this wonderful being yet the reality may not be as angelic; clues such as her leaving Scott in the middle of the night without telling him and leaving a mysterious letter for him point to the fact that everything we see and hear for a lot of the film is just Scott's perspective.

For all it's low key approach it is a shame that the need was felt to create an explosive action packed finale that felt at odds with the rest of the film. The use of green screen for a stunt didn't look that great but with the low budget that's understandable, but the plot point that saw an uncommon object just happening to be in an everyday place as if that was the most normal thing in the world completely ripped me out of the experience as it felt so 'filmy', a shame.

Despite what I saw as a weak ending I still really enjoyed Wasteland thanks to some decent locations used, a solid story and great acting by Madarbakus. As usual for this week guest blogger Lucinda will be providing a second opinion.

Out of all the films that I saw this was by far my favourite. Madarbakus was amazing and played his role so well, considering he was alone for about 85% of the time so he had to be strong. I loved how Beth was put on this pedestal by him, yet the reality of her isn't the greatest. It was beautifully written and acted and was a complete and utter pleasure to watch. As soon as it's released I demand that you see it. You will not be disappointed!
Posted by Daniel Simmonds at 11:33

Thanks for the review! It was a fantastic screening and glad you enjoyed it. Was a shame the full quality of the film wasn't shown on the screen, however here's the link to the trailer if you want a real representation of the cinematography! ;)

Thanks for the film, really enjoyed seeing it :)

You know what? While I don't agree with some of your comments I can totally see how you would arrive at those conclusions. As to being the worst zombie film ever; that would have to fall to Ghoul School, I get the wrong kind of nightmares just thinking about that abomination! Thanks for the comment :)

Thanks for the compliments and the review. Glad you enjoyed.