The UK Festival of Zombie Culture 2013

I returned today from the 7th annual UK Festival of Zombie Culture that took place on the Saturday. Last year I also went but arrived late in the day so made a point of staying in Leicester this time so I could get all 13 hours of zombie goodness! There were six films shown during the event.

Leicester is a place I find stupidly hard to navigate so despite Phoenix Square being a 10 minute walk from the hotel it took us a good half hour to find it. Arriving there did not seem to be that many people as expected, of course this was due to the fact the majority of the visitors were in the cinema screen for the first film that we didn't realise was actually on.

The three minute zombie challenge was the first place visited. Up to last year Dead Rising was the game used for this, but this time Dead Rising 2 was used. I have owned the game for the longest time but have yet to get around to playing it which was a boon. The three minute zombie challenge is quite simple; kill as many zombies as you can within three minutes. I felt like I got off to a good start but then I kinda ran out of weapons, it took an embarrassing few minutes before I finally grabbed a plant pot and hurled it at a bunch of undead taking out four and gaining the top spot with around forty five dead. Not actually that impressive seeing as only one person before me had tried and my pitiful record was soon beaten. My friend Lucinda then tried, she managed an awe inspiring eight kills before becoming zombie food.

A few authors were in attendance including David Moody. He is by far my favourite zombie author (responsible for the amazing Autumn series) and I had to make amends for being too shy to talk to him last year. He was a delight to talk to and while I did geek out slightly on him hopefully was not too over the top. He seemed like a really nice guy, and had some interesting things to say. Wayne Simmons; another zombie author was also there and while I have never read any of his books I was compelled to pick up Flu the first of his Irish zombie novels as sound like they should be interesting. He too was really friendly, so meeting them both was a real highlight of my day! 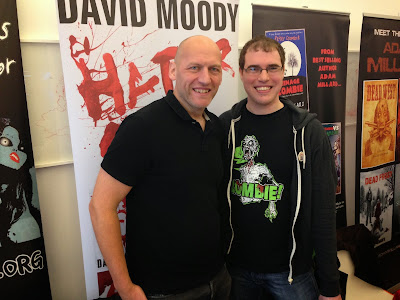 Realising the first film was actually playing we went in to catch the last 30 minutes. The Battery looked like it was a great film, about two men surviving the zombie apocalypse. The majority of the last third was set in a car under siege by the undead. Some fantastic acting; Jeremy Gardner was stunning as Ben and gave such an amazing, realistic performance. A lot of the shots were extended single takes that gave such a raw feel. The Battery managed to be both light hearted but at the same time quite harrowing leading to a strong finish. It is a film I would really like to see all of. The rest of the films I saw will be getting their own reviews throughout next week.

Meteletsa: Winter of the Dead was the second film shown, a Russian zombie film. Unfortunately the copy being shown was pretty broken skipping and freezing until around ten minutes in it was stopped and a back up copy used. A further five minutes until the aspect was corrected to properly fit the screen. A poor start then but in general Meteletsa was not bad, no real new ideas though.

At the festival were a variety of consoles featuring a variety of zombie games. I had a quick ill fated go of House of the Dead 2 on the Dreamcast. I like to think the gun was not properly calibrated but in truth I'm getting old! Been too long since I last played it so my trigger finger was quite rusty. As usual a lot of people were dressed up as zombies which is always cool to see. and slightly unsettling when they act in character. 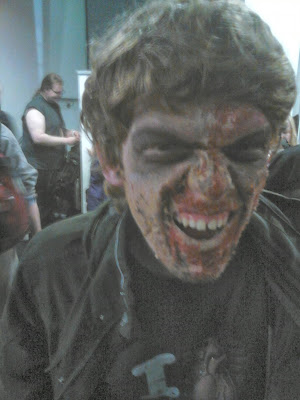 Zombie Hood was film number three and probably the weakest of the lot. This Nottingham based film was not fantastic but really quite funny, I don't think a lot of the humour was intentional. I am not sure if the character of Bill was meant to maybe be inferred of as a paedophile but that was the case with unfortunate lines giving him an accidental creepy persona. Too many unimportant characters and a bare bones plot made this at times quite forgettable. The cast and crew in a Q & A after the film all come across as nice people and the director does hope to be able to make Zombie Hood into a TV series.

Film number four was Wasteland and was the best of the bunch. Much of the film focuses on one character; Scott who is riding out zombie Armageddon hoping for the love of his life Beth to return to him. Quite downbeat but also real in the feel to it with some great performances, just slightly let down by a over the top end sequence that felt at odds with the slow burn of the rest of the piece, amazing for the low budget used. This was followed by an interesting Q & A by the cast and crew.

The penultimate film was Battle of the Damned starring 80's action star Dolph Lundgren. Filmed in Singapore Battle was not amazing and had some questionable acting but was brain dead fun. The inclusion of zombie fighting robots was a treat it must be said.

Finally was this years zombie comedy film. Last year was the awesome Gangsters, Guns and Zombies (as well as Cockneys VS Zombies) this year was Stalled about a janitor trapped in a toilet cubicle during a zombie outbreak. I was not expecting anything as good as Gangsters and so was not disappointed. I wondered how a film set in a toilet cubicle could last ninety minutes without getting boring but Stalled just about manages it. Some of the humour was a bit too puerile but it was quite funny in places and ends strong.

All in all The UK Festival of Zombie Culture was a huge success, I really enjoyed it and am so glad I was able to be there for the whole event this year. Cannot wait for next years one! As I said last year Zombie Ed should be applauded for all the effort he goes to to make these events so enjoyable, a funny man whose dedication to zombies is inspiring.
Posted by Daniel Simmonds at 13:12