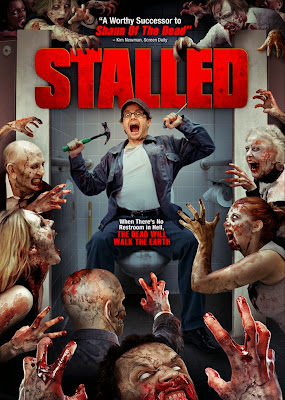 Now I do enjoy a good zombie comedy but they can be hit and miss, from the highs of Gangsters, Guns and Zombies to the lows of Dead and Breakfast. I was not sure what to expect of Stalled, I wondered how a film that takes place almost exclusively in a toilet stall could sustain my interest for 90 minutes, no matter how funny. Stalled was the final film shown at this years UK Festival of Zombie Culture.

On Christmas eve loner janitor W.C is in the female toilets of the office he is employed by to fix a speaker. It is also the night of the staff Christmas party so when some party goers enter he quickly hides away in a cubicle so that he is not seen. Whilst hiding a zombie outbreak occurs (as these things do), it is not long before W.C's cubicle is surrounded by the flesh hungry undead. Bonding with an office girl; 'Evie' in a cubicle a few doors down they begin to plan a way to escape their trap. 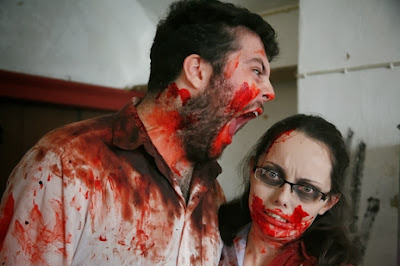 Stalled manages to never get boring, no mean feat when 95% of the film takes place in a cubicle. W.C is not a particularly likable character, he is a bit of a pervert, and has various personality traits that make it hard to support him but his and Evie's relationship is an interesting thing. You never see Evie talk, instead the camera focuses on a drawing W.C has done of what he imagines the girl to look like whenever she speaks. This led me to think that the girl was all just a figment of his imagination, especially as thanks to the low budget it is very obvious the girls voice has been dubbed in as does not sound like she is actually there. She is an essential character though and forces W.C to confront just what sort of person he actually is.

A lot of the effects and the humour reminded me of Peter Jackson's early work; Braindead, and Bad Taste, icky, gooey and bad looking in an interesting way. A lot of the humour was a bit too puerile for my liking, such as when W.C throws used female hygiene products at the zombies as a diversion, just gross. But there is lots of cartoon violence with lashings of blood and gore, and even a zombie rat thrown into the mix that keep things rolling over on the icky front

It is also really quite funny in places. The office party was a fancy dress one so you get zombies in all manner of dress. Early on some kind of super hero bursts into the room with dramatic music playing, then a close zoom on the helmet of the hero reveals it is just another zombie, other ones I recall where a zombie Santa Claus, zombie Christmas pudding, and even a zombie Jesus.  At times Stalled almost takes on a Lee Evans style silent comedy with lots of exaggerated goings on as W.C wrestles with his predicament. A mid film sequence in which W.C takes some Ecstasy to try and help his fear was hilarious thanks to a great dancing montage, the highlight of the film right there for me. I also really loved the ending, simple, but effective

So while Stalled is certainly not the funniest film in the world it was certainly something different and did not get tedious. Each of the five films I saw at the Festival were ones I would gladly watch again, this one was a great one to end on, helped in no part by the amount of alcohol drank no doubt.

Posted by Daniel Simmonds at 13:12