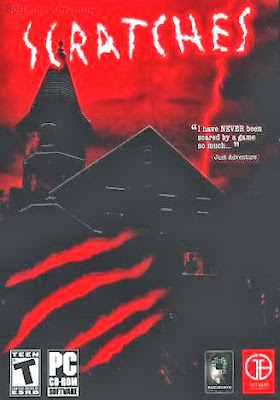 A year or so ago I started playing Scratches, I got quite far but ended up not finishing it. The other week I thought I would start it again for Halloween. Scratches is a first person point and click game that takes place in an old Victorian mansion.

In the 1970's Michael Arthate a horror author has brought an old Victorian mansion in which he hopes to finish his latest novel. From the moment he turns up at the remote place he is fascinated. Letters around the place speak of a cursed African mask that was stolen from a cannibalistic tribe and smuggled back to England which fascinates the young horror writer. His first night there he is awoken in the middle of the night, strange...scratching noises coming from the basement. Trapped at the remote house thanks to his car breaking down he begins to explore the house, looking for answers for all the creepy goings on he is encountering, determined to solve the mysteries contained here. 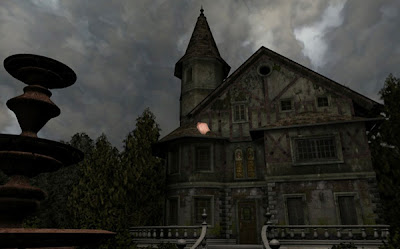 A point and click adventure that has you moving around by clicking where you want to go. Each place your at gives you complete 360 movement in a fixed position to explore your surroundings. The whole place is atmospheric and the sound effects and music create tension and scares. Scratches takes place over several days. Each thing you do in the house passes the time. Mostly you will be exploring the house looking for keys to open the many locked doors and solving simple puzzles that just require you to have the right item for the job. Each night you take part in a nightmare sequence as well as investigate the loud scratches. The night sections are pretty scary though also quite brief.

While I did enjoy the game it can be rather hard to find items hidden in the environment. More than once I had to resort to a walk through only to find out the reason I had gotten so stuck was due to not having picked up an item I needed. Items look the same as the rest of the games scenery and it doesn't help that they are also quite small and un-obvious for the most part. Frequent phone conversations with your agent and others help break up the exploring though the voice acting is pretty terrible. Exploring the house takes a while also as Resident Evil style each room you go into has a door opening animation which is a nuisance for back tracking which most the game is. 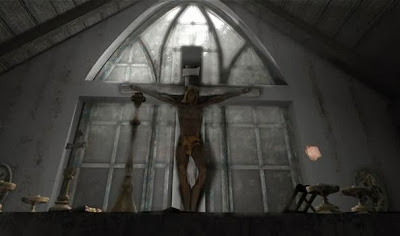 As well as the main game you also get a short game called 'The Last Visit' that takes place many years after Scratches with the mansion vandalised and in a huge mess. This was fun with seeing what had happened to the mansion but the actual game was pretty silly, used mainly to explain in more detail what you may have missed in the plot of Scratches.

The plot is interesting enough and vague enough that events are left open to interpretation, some nods to the works of H.P Lovecraft here. In all though it is not as scary as it could be and some sort of hint option would be useful for when you get really stuck. It never feels like you are in any danger at all which does detract from the experience. In short bursts it is fun but is not one I would be heading back to as just a little bit too slow paced.

Posted by Daniel Simmonds at 08:27