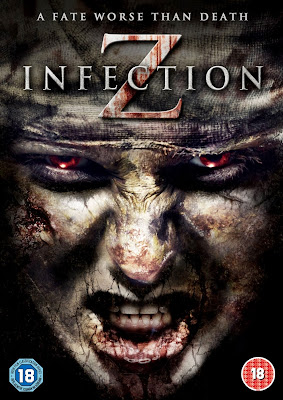 Infection Z (also known as Infected) is a is a low budget zombie flick released straight to DVD. Despite the low budget I was surprised to see some quite well known actors. My friend Lucinda invited me around hers to watch it, she was quite looking forward to seeing it.

A bunch of people are staying out in some cabins in the American woodland to do some hunting. These include Louis (Michael Madsen from Kill Bill) and his son Andrew as well as Dr Edward Dennehey (William Forsythe from The Devil's Rejects) and his son. During their stay the Dr is called upon to visit a sick Grandma who has some strange disease. While treating her she leaps up and bites him. It turns out her and others in the area have all got a disease that has changed them into flesh hungry zombies. Soon the survivors find themselves trapped in their cabin. 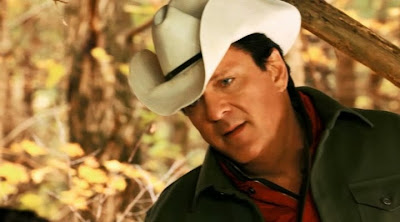 If I had to describe Infection Z in one word it would be 'disaster'. This is an utter mess of a film that is incoherent, badly edited, and with a script that completely stinks, how two such great genre actors such as Maden and Forsythe got caught up in this trash is beyond me, maybe they owed the director Glenn Ciano a favour. I have a very high tolerance for bad films, some of my favourite films are ones generally accepted to be terrible but this was just too much. It is one thing to be bad yet still enjoyable, but this is bad and boring, a cardinal sin in my books!

Characters just appear with no explanation about who they are or what they are doing, a truly weird sequence at some sort of junk yard with a crazed zombie man is never explained and just appears from nowhere, as does Louis's pregnant wife who just appears and then predictably goes into labour late into the film. The plot is all over the place, me and my friend just baffled as to what was going on, just could not follow it. For most of the films running time there is no zombies, it is all the interactions between the unlikable cast at the hunting lodges. The editing and directing is abysmal; jaunty angles, quick jump cuts all seemingly at random with no reason for their being. At one point one of the main characters is silently killed while outside, immediately two other characters come running out a house shouting his name, telling someone else they see that they heard the victim screaming...only I am convinced there was no screaming, I would go as far to say that the scream was supposed to have been edited in during post production but someone forgot to do so. Such a messy, rushed piece, amazing anyone ever thought this was a good idea!

Now it is not all bad, the film starts with a house under assault by zombies, then it goes to black and says '12 hours earlier' with most the film leading up to that point. That was actually cleverly done and the standout moment for me realising events had caught up to the present even if the 3 minute sequence following that is repeated from the films start in its entirety. The end sequence was interesting but to be honest felt like it was from a totally different film.

Logic is just not existing in this world. The appearance of a few zombies has everyone immediately thinking it is the end of the world, I don't understand how they come to this conclusion. This can be seen the first time Louis ever encounters a zombie, despite looking just like an ill human and not actually attacking him he blasts it dead without a second thought. Up to that point he didn't really even know anything was up, it had been assumed some sort of wild animal had killed the first victim found! 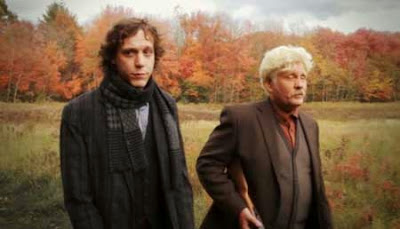 Zombies are very weird and inconsistent. You get the traditional zombies, runners in this case who growl and want flesh but then you get random people in various states of zombification as if there wasn't an agreed upon way zombies would be. The Grandma seems to keep reverting between flesh eating ghoul and harmless woman, some characters turn but still act human like, one character is dragged out a window and apparently eaten but then turns up later looking pretty much fine with zero explanation. Victims are always nearly entirely eaten; flesh, bones, clothes, hair all gone, so utterly silly and stupid. A zombie is inferred to have eaten his uninfected daughter, all that remains is a spine...just a spine...no blood, no guts, nothing, just a spine, so stupid! Where is the rest of her?!

My review has been all over the place, and I have repeated myself lots, going off on tangents constantly. But you know what? That's exactly what Infection Z did also, kinda meta in it's own way. To sum up; Infection Z is a bad, boring, confusing film that is just not worth watching, not even for Madsen and Forsyth who are just weird here. 'Humourous' interludes, terrible special effects, and a nonsensical plot combine to earn Infection Z a place in my Top 10 worst zombie films of all time.