I Have No Mouth, and I Must Scream (1995) - Horror Videogame Review 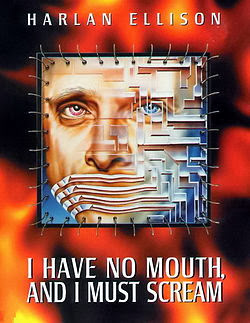 When I first heard of this game a few months back I assumed from the title it was a hot new indie gem, but no! It is instead a 90's point and click adventure game based on the story of the same title written by Harlan Ellison in 1967. I love 90's point and click adventure games so was both delighted and surprised one had escaped my undead grasp...until now.

A global war waged, carried out by super computers designed for the task. One such super computer became self aware, naming itself AM and wiped out all of humanity due to the intense hatred it feels for it's creators. It saved the last 5 humans and keeps them trapped far down below inside the Earth. There it has tortured them endlessly for the last 109 years, making sure they can never die. AM is an angry machine, driven insane by the fact that it is the most intelligent thing in existence, yet it has nothing to do with it's vast intellect, trapped for eternity in it's own shell. AM sets a task for each of it's 5 captives, promising reward for completing the tasks, something it has probably done many times before, yet this time something is different, one by one the prisoners manage to overcome their flaws and succeed where AM computed that as impossible. Someone or something seems to be aiding the humans... 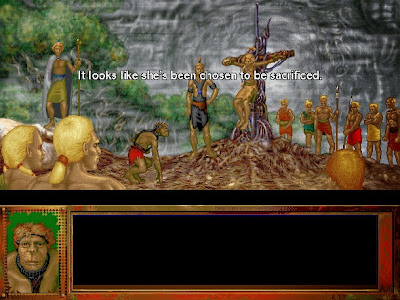 I Have No Mouth, and I Must Scream works fantastically as a point and click game. Each of the 5 characters have their own little adventure to play through, these can be done in any order. Nimdok; an old Nazi Dr finds himself in a concentration camp in the end days of World War II. Benny who used to be a brutal soldier finds himself in a strange primitive village where the inhabitants are forced to regularly make human sacrifices to AM. Ellen finds herself in an artificially created Egyptian pyramid where she discovers just why she is terrified of the colour yellow. Depressed Gorrister awakens to find himself heartless, on a blimp flying over endless desert. Lastly (or firstly, as I said, any order) Ted a confidence trickster finds himself in a medieval castle where a witch plans to sacrifice his one true love to demons.

Like the best adventure games you select various icons from a menu to do different actions (such as Use, Talk To, Look At etc). You explore the environments talking to other characters, and picking up items in order to solve various puzzles. Adventure games went away originally because the puzzles just got more and more obscure. Scream over comes this with an ever present hint option that gives you a cryptic clue on what to do next. It is quite clever in how it is written relevant to the character giving words that have double meanings. 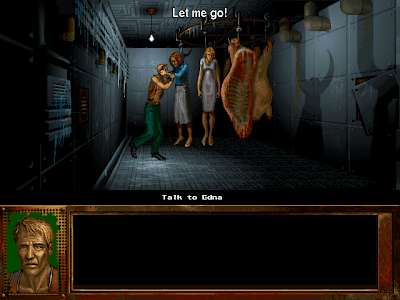 Scream deals with some serious issues that I really was not expecting. A Nazi concentration camp is just the tip of the iceberg, though a big tip (what with you performing a cruel experiment on a child as part of Nimdok's story). Other issues that pop up include good old murder along with cannibalism, suicide, mental health, sex, and rape. Rape in particular was a big shock as there was such an interesting way it came to be explored in the game. Each chapter has a character deal with their past and is stand alone. These concise chapters not only stop you from becoming too lost, but also gives you plenty of variety, some better than others. For sheer enjoyment I would rate Ellen's as the best chapter, Gorrister's as the worst due to it's often illogical puzzles.

You can die, or otherwise fail a mission something which I am not keen of in point and clicks, this seems to have most effect on Benny's story as it is time specific so I found myself having to try and do that one 4 or 5 times before I worked it all out. Also you can complete the missions in different ways which effects the games ending. Each character has a kind of morality meter which changes depending on your actions. One mission for example sees you needing to get a heart. You can achieve this by stabbing to death one of the people you encounter and tearing out their heart. The good way sees you getting the heart from a corpse of a pig, so quite a difference. The final mission that takes place after all others was not very good. Adventure games tend to have a hard time coming to an end, this is sadly no different with a weak and disappointing ending. 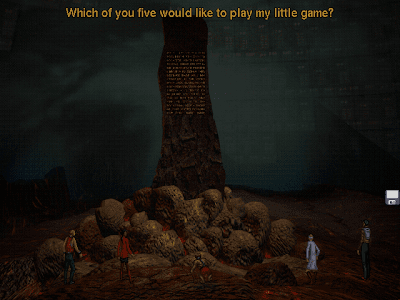 Last topic is the voice acting. The computer AM is voiced by the writer of the book; Harlan Ellison! Knowing his story so well he is able to really give a great performance, he delivers his line with menace and glee, really coming across as a viciously angry being. I loved that he was given a human voice rather than some silly robotic voice. The other characters have terrible voice acting, or rather it is passable but all wrong. The 5 survivors are supposed to have been physically and mentally tortured for the last 109 years, yet none of them sound remotely scared, angry or anything other than bored. Ellen the most wrong sounding character is really sassy, talking about AM in an almost friendly way. The voices are all at odds for the situation they are in.

I Have No Mouth, and I Must Scream is a good adventure game based on a great idea, I plan to read the book as soon as I can. As a game it excels with dealing with serious issues and is an interesting experience, well worth playing, it is just a shame the voice acting is so off putting (Ellison excepted) and that it falls into the trap of having a weak ending.