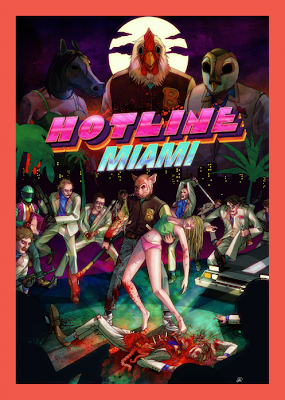 I had heard from many sources that Hotline Miami was a great game, but I never felt like it would really be for me. It is a top down shooter in which both you and the enemies you face can be killed with just one attack making for a strangely tactical puzzle like experience.

You play as a killer who each morning receives a phone call instructing him on where to go to carry out some assassinations. To do the job the killer dons an animal mask. That is pretty much it for story to begin with, but needless to say before the games end you get more reason for doing the murders. 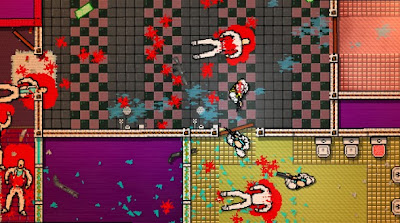 The visual style and soundtrack combine to create a game that is pure heaven to play. The graphics are simple overhead 2D sprites but have a uniform feel to them that just works. The colours used are all garish 80's themed that work so well with the 80's style synth music. Each level has you after an intro sequence arriving at the location for your hit, these are all interior locations and range from offices, to restaurants, hotels and more. Despite a varied amount of locations they all look kind of similar due to the simplistic graphics. Enemies also all look pretty much identical, for the most part fighting goons in white suits. Large brightly coloured scores pop up for everything you do giving a strong arcade feel.

Despite the simple gameplay Hotline Miami never gets boring, it is hyper addictive. Death comes often but you always instantaneously respawn at the last checkpoint you got to so it is never a chore to die. Each level is like it's own little puzzle, goons will attack you on sight but a well placed punch can knock their weapons out their hands. All weapons kill with one hit on most enemy types, while throwing weapons and opening doors on bad guys stuns them. Guns are powerful and can be used from great distances, but the flip side of that is many times you will suddenly be killed from someone off screen. When your in the grove and systematically taking out foes left, right and centre it can be a real adrenaline rush. Once a mission is done (that usually just involves everyone in the place your at) it is your job to leave the location. Bodies stay where they fell so it can be oddly grim making your way back to your car with the droning song that plays and dark visuals combining to really get you to question just what you have done as you walk past tonnes of corpses (kinda reminds me of Travis Bickle at the end of Taxi Driver). 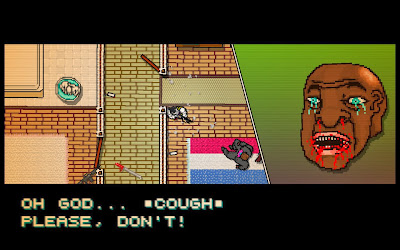 To spice things up you get a variety of different animal masks that give you various perks such as the pig mask that gives you more ammo in your guns, or the giraffe mask that lets you see further ahead in the stages. Also some stages are made more with plot in mind than fighting, including one stealth stage that was not the greatest. Before and after each stage you get an interactive story element  that added a lot to what would otherwise just be a ton of shooting.

Hotline Miami is a very violent game, blood is everywhere, and your character finishes off enemies in the most brutal ways, such as stamping on their faces till they explode, or gauging the eyes out of one boss. My favourite weapon was the katana sword as it literally ripped the targets apart. Again music must be mentioned as I have never seen such a fantastic marriage between visuals and sound. Each tune seems tailor made for the killing fields and to be honest had me bobbing my head about in appreciation for the dance beats! 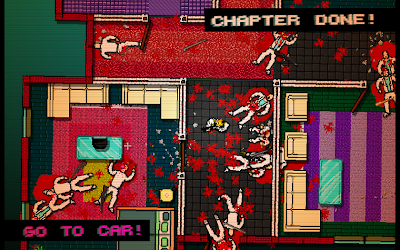 At around 20 missions (that includes a bunch of levels after the end credits) and with a fairly engaging, bizarre plot that reminded me a lot of Killer7 and a definite dirty feeling that you are not remotely a good person, this is something really worth playing and feels so utterly fresh. So brutally violent, so fun to play and such a thumping soundtrack. Not the longest game in the world (around 4 hours to play through) but is a cheap price so essential.