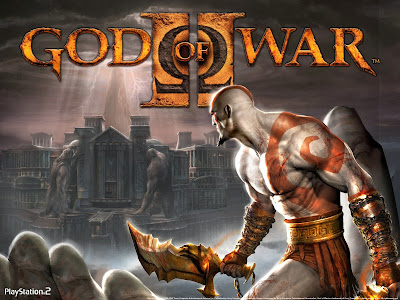 On my endless quest to play through the God of War series I have just conquered the 5th chronological game (6 if you include the ios only God of War: Betrayal). I am starting to get a little fatigue I must admit but with only God of War III left I must battle on, much like Kratos himself would!

After becoming the God of War at the end of the first PS2 game Kratos leads the Spartans on a bloody conquest throughout the ancient world. Athena begs him to stop his warmongering  as he is making Zeus the ruler of Olympus mightily annoyed. Ignoring her Kratos decides to join his armies fight beaming down to earth as a gigantic God (I guess this is an ability he did not realise he could do previous as being a 60 foot tall invincible being would have sure made his quest in Ghost of Sparta a lot easier!). After being drained of some of his God powers and being attacked by a magically animated Colossus of Rhodes Zeus sends down a powerful weapon; the Sword of Olympus. Kratos is encouraged to put all his remaining God powers into the sword so he can defeat the Colossus but after doing so Zeus appears in person and betrays the God of War, using the Sword of Olympus to murder Kratos. Saved from oblivion by the Titan Gaia he sets out on a quest to seek the Sisters of Fate who are able to grant him the power to travel back in time and avert his deadly fate. 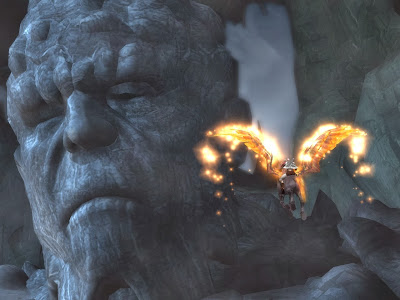 Quite a convoluted story but the story this time around is quite interesting, many long CGI cut scenes pop up throughout giving back story on the war between the Titans and the Gods. Kratos is at times reduced to a comedic character, none more so than the laugh out loud humiliation he receives in front of his faithful army. First being crushed by a giant stone hand as he gives a speech to his men then his armour falling off piece by piece. He is given real arrogance and it could be said he deserves what happens. The game has a fantastic end sequence which eclipsed anything that came before and made me pumped up for the next in the series.

The game surprised me at the lack of imagination at times in its level design. A lot of the game has you going down super linear pathways. It was cool to see swamp and lava levels but when it is pretty much a straight line it does take you out of the experience and let you know your just playing a game. There is nothing to rival Pandora's Tower with the main puzzle dungeon here not feeling that big and being quite easy to progress through. Puzzles seem a lot simpler this time around though some invention was used. 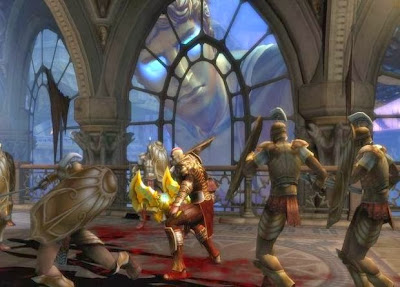 Combat is as it ever was, the same enemy types for the most part. Snake Women, Cyclops, Minotaurs, basic monster soldiers etc. New enemy type include exploding insect things and pig type monsters but apart from that it is business as usual. The QTE's needed for defeating enemies seem a lot friendly and more forgiving now. A lot of the bosses you fight are human enemies, or human in appearance, it seemed maybe the monster pool had been drained a bit as is the mythology. Jason and his Golden Fleece, Icarus, Pegasus, the Phoenix all these crop up for their part but there is nothing too exciting. The few monster bosses you do get to fight are fun, one in particular that was a multi tiered fight against a being made up of breasts and arms was a later highlight. A cool boss fight is also included in which you fight someone else while both in black silhouette that has a cool twist to it.

As usual you get experience to upgrade magic and weapons. Magic includes a stupidly over powered earthquake, Medusa head once again, lighting bolts and magical arrows. Not bad, especially when levelled up. Mid way you get the ability to glide that created some interesting new puzzles. While many locations are bland (including a terrible flying level) there are still some standout ones; giant horse statues and a level based around Atlas (still miffed at Kratos from what happened in Chains of Olympus). Both are huge in scope and quite well designed. 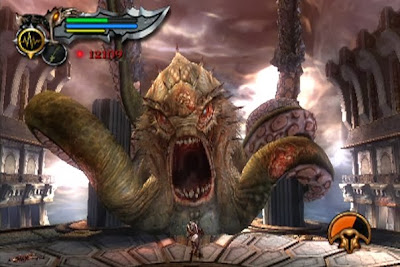 I expected God of War II to be a better game, some have said it is the best in the series but I just did not see that. It is fun and has a great end sequence but for the most part it didn't feel anything special,  I certainly did not have the urge to play through it in one sitting. The graphics are also not amazing in places, even with the HD treatment. For God of War fans it is unmissable though as a lot happens. Kratos is quite an angry man!