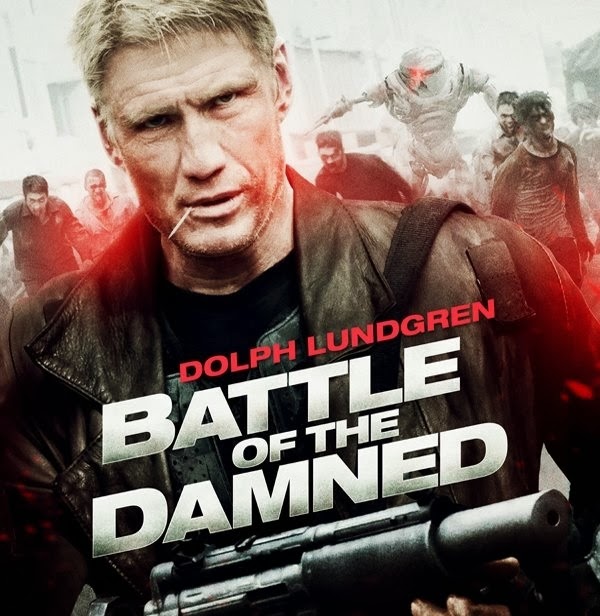 The penultimate zombie film at this years UK Festival of Zombie Culture and one I was looking forward to seeing thanks to it starring 80's action star Dolph Lundgren was Battle of the Damned. Now I was not expecting anything at all ground breaking in this mash up of sci-fi and horror but I was expecting some mindless fun.

It starts with text on screen explaining that a zombie outbreak led to a city somewhere in Asia being sealed off from the outside world, trapping both infected and uninfected alike there. Dolph plays Max Gatling who heads up an operation to enter the forbidden zone and rescue the daughter of a V.I.P (who just so happens to be the man responsible for the outbreak in the first place). With most his squad killed by the ravenous ghouls, and the allotted mission time limit up Max decides to stay in the danger zone rather than evacuate to complete his mission. He soon finds the girl and a bunch of survivors she is holed up with, but nothing is ever easy as not only is there a group of malfunctioning robots rampaging through the city but also the place is due to be fire bombed at any time, so Max has his work cut out! 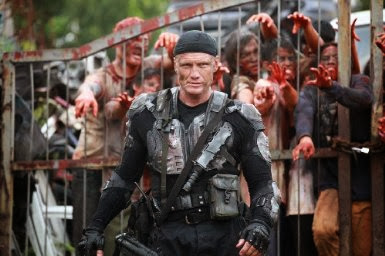 Battle of the Damned was enjoyable, though certainly not a film that tries to convey any sort of message of any importance. From the heroes name alone you can tell it is an ode to the 80's action films of old. Dolph is starting to look his age now but spending most his time contained in the futuristic military suit thing it is only when he pauses to make plans that this is really seen. Every time he goes to read, his character puts on these ridiculously old man reading glasses that just had me and everyone else laughing out loud. Side character suffer more, the daughter of the V.I.P (Melanie Zanetti) comes across like Asia Argento, a bad-ass first seen battling zombies in a convenience store with a shotgun before a cool chase sequence, she is in fact not bad. Matt Doran as her romantic interest Reese though just looks weedy, is hard to take him seriously. The rest of the characters are mostly forgettable with the exception of Elvis who becomes almost on par with Max for skills, and I enjoyed the character of Duke (A bad guy in a weaselly kind of way).

The previously mentioned robots were a cool inclusion. I really can't think of a single zombie film out of the hundreds I have seen that have featured robots. Scenes where waves of the undead advance on the giant machines were pretty awesome in all honesty. The special effects while not stellar are still good enough. Why zombies are trying to eat the robots that do not even look remotely human though I do not know! 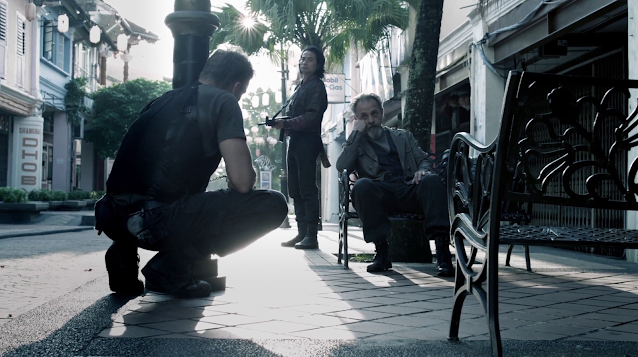 The plot is nothing special, I wouldn't expect it to be but the fact the city is to be carpet bombed is something that comes out of nowhere and a late twist was really pointless. With montages, traditional 80's action heroes and plenty of one dimensional characters this is a modest love song to the films of old. That in turn does limit it's ideas though as genius robot inclusion aside there is not any innovation.

With plenty of zombies, plenty of action, and of course those robots Battle of the Damned knows exactly what sort of film it is and gives you everything expected of it. A good film to drunkenly watch with friends.