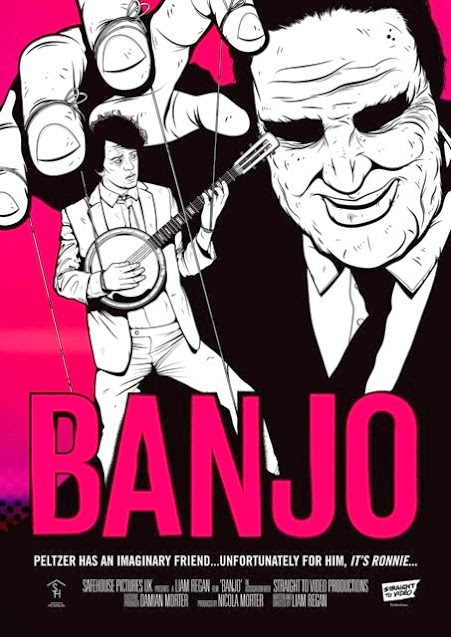 As per usual I am so far behind with all the horror posts I have on my to do list. Today it is the turn to talk about Banjo,a British indie film that judging by its trailer doesn't take itself too seriously. As an aside, I love the poster design!

A bullied office worker; Peltzer reawakens an imaginary friend he used to have called Ronnie (who appears as a caricature of Ronald Reagan) via a Ouija board in order to get his revenge on his co-workers and cheating girlfriend. However Ronnie starts to manipulate Peltzer to get his revenge in the most gruesome way possible and things begin to get out of hand.

I thought the trailer was fun for this, it has been described as a cross between Drop Dead Fred and Basket Case, the character of Ronnie reminded me of Freddy Kruger during his more comedic films, all over the top glee and weird prosthetics. Whether he is a real thing or just part of Peltzer's fevered imagination will be something to discover. It looks like the film is going to be quite gory and gooey if the amount of bodily liquids shown in the trailer is anything to go by.

Banjo is produced by Safehouse Pictures who were responsible for the not bad The Eschatrilogy: Book of the Dead, It has a Kickstarter page and has met it's modest budget of £5,000 with 15 days still left to go, so should go into pre-production in May 2014. Check out the trailer below...