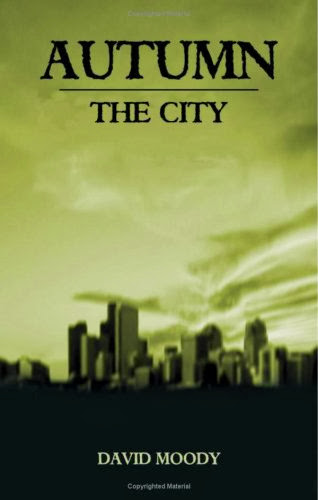 First off I must mention that I met David Moody a week ago, it was a pleasure to meet him, he was a friendly and interesting man. The Autumn series of zombie novels are as I have said many times before my favourite horror series. Autumn: The City is the second book in the series and a vast improvement on the first (though that too was a good book). Some mild spoilers ahead but if you have not yet read Autumn then you should probably read that first anyway!

A lot of The City takes place at the same time as Autumn. The first book followed some survivors heading out into the countryside to escape the undead menace. Here, as the title kind of implies much of the book takes place in a city. A large group of survivors are holed up in a University complex but their every move brings more and more of the undead to their location. Meanwhile a group of soldiers emerge from an underground bunker where they had escaped to prior to the disease that wiped out most the worlds population. The virus still lingers in the air so the soldiers must wear full body suits when outside. On a recon mission to the city one of their number; Cooper gets separated and by chance discovers he is one of the naturally immune. Meeting up with the survivors at the University they formulate a plan to make the journey to the bunker and to safety.

The most unique thing about the zombies of the Autumn world is their ever changing behaviour. Around the first half of the book takes place over the same time span as the first book, later more changes are displayed in the undead as they start to get angry and more violent. Everything is bigger this time around, there are more zombies, more survivors, more action and the plot while simple is exciting. The fast pace of the story led to me being unable to put the book down after the first forty pages.

I admit when it comes to book reviews I suck, in general I spend far too much time talking about plot rather than the craft of the thing. Moody is great at creating images in the mind with his descriptions, I swear reading the thrilling finale it was almost like I was watching a film, I could hear the characters talking, I could picture where they were and what they were doing. One thing I do always struggle with is remembering just who is who, mostly due to the large number of characters. Ones such as Cooper totally stick in my mind, but quite a few of the sub characters such as the old University guy, the angry bloke who wants to get drunk, and the doctor all just meld into one so I am eternally confused just who is talking.

The sheer number of the zombies is really something to picture, though the bodies are far more frail than other zombie fiction so they are no problem for any of the survivors to dispatch or even force their way through. One of the messages of the book though is that they are legion, it doesn't matter how many you kill there will always be more, and even just by killing them you attract more as in a dead, silent world any sound is a beacon shining out.

Autumn: The City just gets better as it goes along, I immediately went straight onto the third book in the series as soon as this one was finished, awesome stuff.