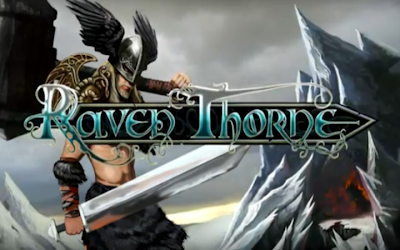 First off, must wish a happy birthday to my friend Claire as it is her 27th birthday today, woop! Onto the review. As always I have loads of indie games waiting to be played. I must stress I have only played the demo so is not that fair a review. A long day at my day job makes for a tired rotting zombie. Raventhorne is a 2D fantasy brawler with RPG elements.

After waking up after apparently being dead (I kind of skipped the intro) you head off into Viking land to battle monsters. You play as some sort of Viking and are armed with a sword, hammer, and have access to magical attacks.

I was initially thrown by how tough the enemies were, the first one I encountered took a hell of a beating before it was vanquished. A few enemies later and I levelled up, becoming stronger and gaining more health so I think after a tough start it may get easier to play. You have a stamina bar also that quickly reduces meaning you are left defenceless at times during fights which was irritating.

Raventhorne looks beautiful, almost hand drawn 2D art style to it though the animation were a little bit Monty Python-esque for my liking, frames missing or some such thing. While I soon tired (what with being tired in the first place anyway) I feel that with proper investment there would be some fun to be had here, looks good and has a fitting fantasy soundtrack.