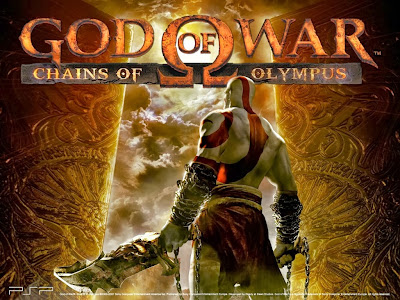 God of War: Chains of Olympus was first released in 2008 for the PSP. In 2011 it was remastered and put on a disc alongside God of War: Ghost of Sparta on the PS3 which is the version I played.

Chronology wise this is the 2nd in the series taken place some years after the events of God of War: Ascension. Kratos has been working for the Gods, hoping to one day be freed from the pain and torment he has known after being betrayed by Ares the God of War. Summoned to the city of Attica to stop a Persian invasion he witnesses Helios the Sun God plummet out the sky and the dark land become enveloped by a strange mist. Morpheus the God of Dreams has plunged the world into slumber, this has also afflicted most of the Gods of Olympus. Setting out to free the Sun God Kratos uncovers a plot to destroy the world, but just who is responsible? 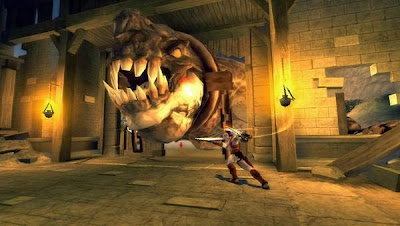 Technically this is the first PSP game I have ever played. I expected the graphics to be quite basic which they are, though they are functional and give a good sense of scale. The HD up-ressing is well done, everything looks smooth though close up can be quite blurry. Coming from the new PS3 Ascension to a 5 year old game was quite jarring (I am currently on a mission to play all games in chronological order) but at times the locations were quite interesting with some grand scope (a section set in Tartarus features a huge bound Titan in the background for example). Battles are more arena based, often upon walking into a large area red barriers will appear on all the exits while enemies start spawning out of the ground. A maximum of around 5 enemies at once, though the combat is good fun.

I expected Chains of Olympus to be quite short but it was good to find out this is a decent length, must have been around 5 or 6 hours in total. The biggest concession was save points everywhere, along with checkpoints everywhere. The actual save motion is kinda badly done, as is the inventory screen which reeks of PS1 quality style. The music is actually really good and fitted the Greek mythological style to a tee. Cutscenes frequently pop up and are not bad, fully voiced and as is always the case with these games there are lots of basic looking topless females if that is your thing. 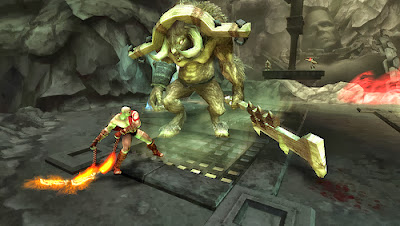 The main enemy type you battle are undead soldiers, armed with swords and bows. Bigger enemies such as golems and giant wolf creatures appear frequently as do more demonic creatures and flying bird monsters. Kratos has his chains as his default weapon but later gets access to a powerful armoured glove. He also gets access to some magical attacks such as an Ifrit, the gaze of Charon and an awesome Sun shield that can be used to fling back projectiles at their sender as well as interrupt attacks in order to counter attack. Bosses are fun to fight and start well with the early battles against a huge beast; the Basilisk. Nearly every monster you fight can be defeated with QTE's that involve inputting button presses or rapidly tapping buttons. The ones that require you to use the analogue stick I found hard to get to grips with initially that led to some frustration.

Starting off in the cities of Attica and then Marathon you soon get to various different temples but the highlight by far was the Underworld Hades which Kratos travels to for reasons I didn't particularly understand. While here you fight through various hellish places that did bring to mind Dante's Inferno. The plot is very basic, this very much feels like a side story but it does get really interesting towards the end having some quite cool moments (as well as the weirdest QTE I have ever done!). From when Kratos goes to Hades though I did get confused as a new story seemed to start that I seemed to have missed the start of. 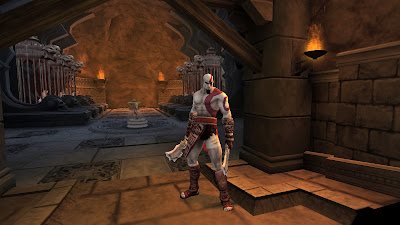 With experience gained to improve your weapons, and hidden items that increase your health and magic the combat and exploration while simple, never gets boring. Really not the hardest game in the world but I did have a lot of fun exploring this simple looking, yet enjoyable world. Onwards to..God of War!