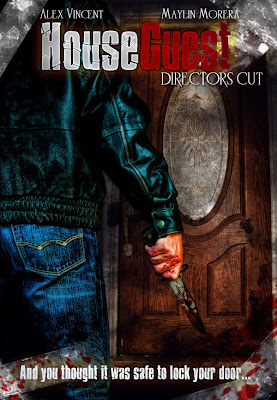 To start with I am in a bit of a rage. I just spent half an hour writing a review using crappy 'Blogger' for it to decide on it's own that it wished to delete the post. Cheers for that you complete piece of junk. If it wasn't for my Google rankings I would leave here and just use therottingzombie.co.uk. Nothing but trouble on Blogspot, avoid! Excuse me if I sound disinterested, but that's what you get having to try and remember what you just spent half an hour of your precious life (which I will never get back!) writing about. Apologies to House Guest if I sound bored out of my skull.

Jen invites her new boyfriend (Chase Diamond)  back to her house as her parents are away on holiday. Also there is her adopted brother Rob (Alex Vincent from Child's Play 1 and 2) and his friends who all decide to get drunk. There is a killer on the loose in the city and unknown to them the killer is none other than Chase's psycho father; Micky. Also unknown to the group Chase has invited dear father along to the house as a place to hideout until the heat has died down. With the party in full swing and with the ever present news channel playing in the background it isn't long before everyone discovers just who they have allowed into their home. 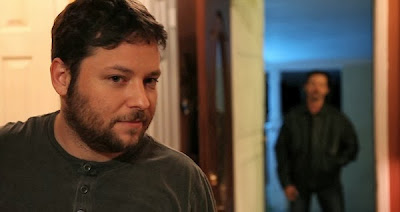 What I loved about this film was the suspense it builds. The father (played by Randall Speakman) is so obviously (to the viewer) the killer, everything about him screams it, so as the group sit there drinking with the news channel on silent you just know any second a mug shot of Micky is going to show up on screen. By far Brian Jalbert as Chase is the best character, utterly torn between his new found friends and his loyalty to his father who he has only recently discovered is a cold blooded killer. The tension, unseen to the group is amazing during the initial drinking games, the way the characters are not informed, yet you as a watcher are is fantastically done. I am so bored of home invasion films yet it actually makes a change to have the invader not only not wearing some goofy mask, but also to actually be invited in rather than invade.

For an indie film (filmed in 6 months on a budget of $3,000) House Guest is very good. Acting is frequently terrible with lots of other emphasising and un natural behaviours; Jen's (played by Maylin Morera) sole topic of conversation to everyone she meets being about the killer on the loose is odd (also why have the news on during a night of heavy drinking:?). The directing by Jake Jalbert is very good, lots of great shots used and the soundtrack used is also great, very fitting. Speakman works as the villain, especially as he reminded me of a high school bully I once knew. The characters of Rob and Jen also work very convincingly as brother and sister, the scene where she is constantly apologising to her brother for the terror that has transpired was stunning in my very humble opinion. 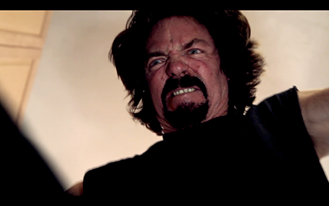 House Guest can be purchased from the official site, or brought from trusty Vimeo. I enjoyed it, I was drunk (still am) but thought it was far better than it had any right to be.

Posted by Daniel Simmonds at 14:19