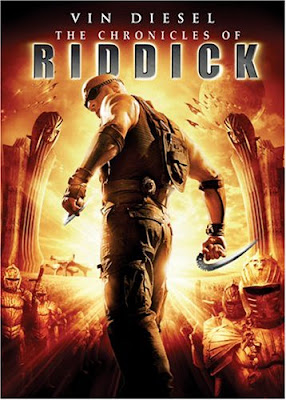 With Riddick due out this Wednesday I thought it was high time I saw the previous one having played the game and watched Pitch Black and Dark Fury. Apparently The Chronicles of Riddick is a cult classic despite not doing well at the cinema. Just checked this and the directors cut sold 1.5 million copies on its first day of release!

Five years after the events of Pitch Black and Riddick's self imposed exile to a desolate frozen planet is ended with the arrival of bounty hunter Toombs. Knowing of only one man who knew his location Riddick heads to New Mecca where the priest he rescued in Pitch Black resides. There Riddick finds out that the planet is about to be assaulted by Necromongers; a mysterious unstoppable army who are out to kill or enslave the entire universe. The leader of the Necromongers; Lord Marshall wants Riddick dead for he is the last of the Furyan race who were prophesied to kill him. 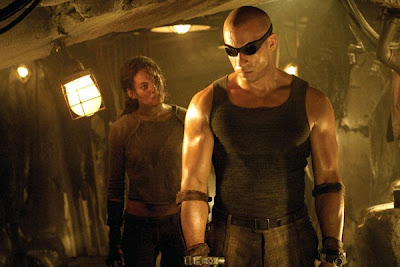 There are so many special effects used in this film that it gets an unrealistic feel to it, so many of the settings are fantastical and large in scope that they just look fake, like being inside a videogame. That is not to say the film looks bad, it looks fantastic, just was always in danger of dragging me out of the experience due to the unreal look of locations.

I have said before but Riddick is a complete dick of a character, usually he is a pretty damn miserable, unlikeable being, here is not really any different, it feels like he is the only one who doesn't know what a joke he is. Still there are quite a few awesome fight scenes with him battling multiple adversaries at once and he even gets to show some rare emotion at one point which made a nice change but overall he is still a complete one dimensional anti hero. Much better is the character of Jack (now named Kyra). She has some crazy combat skills that perfectly complement Riddicks fighting style, her character was a much more likable one and more awesome to watch her in action with her cool shoe blades she is armed with. 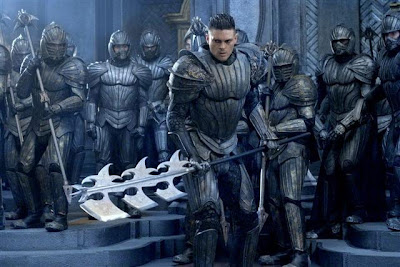 Judi Dench (who has a small part in the film) has gone on record to say she had no idea what the plot was, I kinda agree, it is a simple plot yet manages to seem convoluted and confusing so much so that my first attempt to view it a few months back failed. It has a great style to it and some cool sequences, one where Riddick is racing across the surface of a desert planet, out running the deadly sunrise was a particular highlight, as is the design of the Necromongers, whose ships resemble huge stone statues and communicate via human in a bubble device things (hard to explain!), great designs, unique.

The CGI effects may be bad at times, such as the battle with the monster dogs but the action more than makes up for this, maybe style over substance but it doesn't matter when it is so inventive. I am really looking forward to Riddick now, this feels like a film I would happily watch again, something that I don't get the urge to do often.