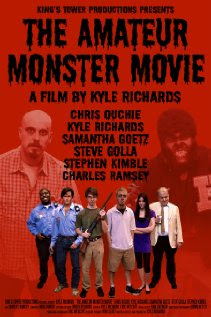 The Amateur Monster movie is an indie film that sets itself up as a parody of terrible horror films. The question to be asked is can a cheaply made amateur horror film really manage this task?

The intro in which a Boy Scout group are slaughtered by a werewolf and zombies on the small Island of Cadaverous sets up the tone of the film well giving legitimate humour and also to show that despite being a parody it wouldn't skimp on violence. The action then goes to loner nerd Walter Romero (Chris Ouchie) whose discovery at school of his best friends death at the hand of monsters transforms him into an action hero of a kind determined to get to Cadaverous Island and take his revenge. Along the way he joins up with stoner Johnny Mason (Kyle Richards who also wrote and directed the film) and school hottie Ashley Valinski (Samantha Goetz). Meanwhile after zombie apocalypse starts to claim the town the slimy Mayor and a group of Police led by foul mouthed, no nonsense Officer Larry Hopkins (Steve Golla) head to the Island to answer a distress call. 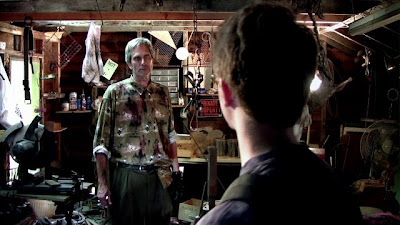 Now I did like The Amateur Monster Movie, it has a lot of good things going for it and some of the humour hits the nail on the head. The purposeful over acting of the characters works a lot of the time, not just being restricted to shouting or over empathising words. Ouchie is something quite different in his role as Romero, his character seems to act like he thinks he should be expected to act speaking a lot of stilted rabble rousing soundbites that no one really pays much attention to, his blind adherence to the stereotype he has put himself as makes him assume Ashley will become his girl, and his grim determination to end the horror is at complete odds with the bullied loser he is at the films start. Surprisingly it is a lot of the adult actors whose roles fall flat, maybe the wooden acting fits in with the aim to do a parody but it just makes their roles seem flat and boring.  The stoner character just become super irritating, Golla and his fellow officers are awesome though.

Mostly this functions as a zombie movie and has enough that it does a fun job, the zombies have some grey makeup on and that is about the extent of it but I am one of the proponents of the adage that that is all you need, they just need to look different from the humans but alike at the same time. Usually zombie violence on humans result in latex skin tear but other ones such as a zombie pulling someones head off looks bad. Never scary but then that isn't really the point. Characters treat the zombies with little respect such as the stoner trying to imitate Michael Jackson's Thriller dance in front of the approaching hordes. The werewolf looks rubbish, I'm not really sure what the point of it in the film really is and apart from a few small scenes and a cringe inducing song played during a Scooby-Doo style chase scene it is not even relevant. 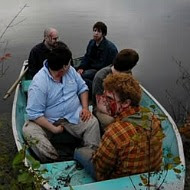 Frequently I was laughing out loud during the film, it excels when it is doing montages and dance scenes, one where a trio of characters are dancing in their truck to music on the radio as their colleague is slaughtered behind them was fantastically done, and a montage scene in which Romero and his new found friends get stoned intercut with scenes of zombies taking over the town is really well edited together. Many of the jokes do fall flat such as low brow scat jokes but others such as the recurring 'double team' joke became quite funny and are used in moderation. Love the way that Romero doesn't manage to hit literally anything in his shotgun action scenes just adds to the characters endearing charm.

The soundtrack is awesome, by far the best thing next to the humour, good enough that I sat through the entire end credits to listen to it. The dialogue is badly written, far too much swearing uncomfortably jammed in that just sounds too forced and out of place that it brings you out of the experience. A lot of characters you wouldn't expect to die are killed, even for a zombie film characters die who I didn't expect to. Plot is terrible but it is meant to be and the script does highlight this. 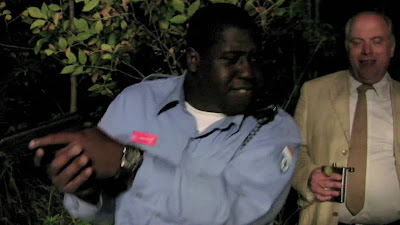 All in all The Amateur Monster Movie is certainly not terrible, it has enough going to keep it entertaining, maybe some stuff should have been left on the cutting room floor to trim some of the fat off, still I feel it is worth a watch.

Posted by Daniel Simmonds at 02:05