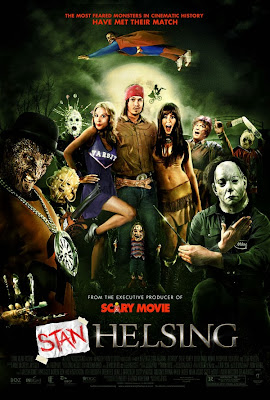 Stan Helsing was free to watch on the X-Box 360 this weekend and as it was horror based thought I might as well take advantage of this to review it. The film comes from the producer of Scary Movie and like that it is a parody of horror films.

Stan Helsing; a clerk at a film rental store is told by his boss he has to deliver some videotapes before he is able to finish work and head to a Halloween party.. Travelling to the delivery address with his friends Teddy (Kenan Thompson from Kenan and Kel), Mia, and ex girlfriend Nadine the group are plagued by bizarre situations. When they get to the gated community the tapes are to go to they discover a cursed place where slashers roam who are made up of parodies of Leatherface, Freddy Kruger, Chucky, Jason, Michael Myers and Pinhead. Everyone thinks Stan is the fabled Van Helsing who it was prophesied would arrive to save the town and so he accidentally finds himself with no choice but to fight back though spends his time trying to do anything but that. 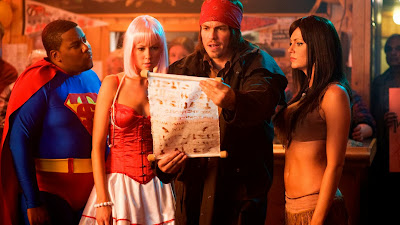 Like Scary Movie the humour here is not fantastic, I haven't seen Scary Movie for a good few years but remember it was funny in places. Stan Helsing didn't make me laugh out loud, or even make me inwardly smile during the entire running time. Bad innuendo, toilet humour and obvious jokes do not a good film make. Along with this bad humour is a lot of female flesh on show, expected for this type of film and again falls flat, the scantily clad characters of Mia and Nadine are attractive but they exist solely for male titillation. Stan Helsing does feature a load of horror film references which is admirable, as well as the mentioned slasher icons there are references to a hell of a lot of horrors such as The Ring, The Sixth Sense, The Hills Have Eyes and many more. My favourite line came from when Stan was talking about the delivery address "Its 1428 Elm Street, I think it's the last house on the left" not funny, but clever I thought.

The main slasher parodies though billed as the main attraction get very little screen time, a lot of the time it is other situations going on like a deranged hitchhiker, transvestite waitress (played by Leslie Nielson) and his karaoke bar and a crazed trucker whose dog (a Cujo-alike) the group accidentally killed.The main showdown with the slasher icons just feels throwaway like there was no time left to film anything better and the ending is just poor. Sure you don't expect great plot but here it is bare bones at best with some bizarre interludes that make zero sense. Acting is of course all pretty terrible as well it must be said and the four main characters are likeable enough for what they are. 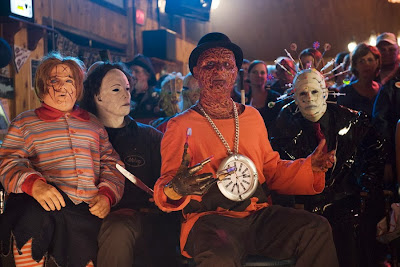 You know what your getting into if you watch these type of films, they must appeal to someone as otherwise why do all the parody films keep getting made? I have been critical but as an overall experience I really did not mind it, it kept my interest and while it failed at making me laugh at all the whole feel of the film was consistent and was perfect for a lazy Sunday evening with the brain switched off.