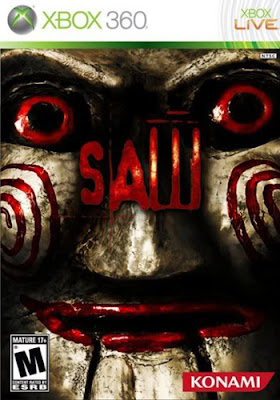 A slight confession of mine is that I have always wanted to play the Saw games, I knew they wouldn't be stellar games but the allure of survival horror drew me on. Finally being cheap enough I purchased the first game.

Apparently canological the game Saw is set between the events of Saw and Saw II. You play as Detective David Tapp who after apparently being killed in the first film awakes in an abandoned mental asylum that has been turned into a giant death trap for his benefit.  Jigsaw informs him he is to be tested for his obsession with catching the killer and must work his way through the asylum solving the many deadly traps and encountering people whose lives he has ruined in his desire to stop Jigsaw. Many different people have also been captured, mostly criminals that Tapp has arrested in the past, each has been given their own game to play with the end goal being to kill Tapp and get the key to freedom hidden inside his body. 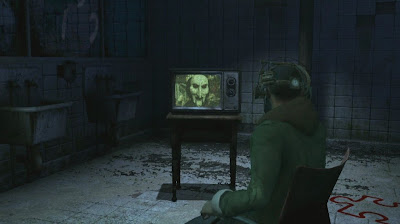 Saw is definitely survival horror and the whole premise actually does lend itself well to this type of game. This is more puzzle focused in keeping with the nature of the films, you spend as much time solving puzzles as you do fighting the desperate people trapped in the asylum with you, more in fact. Puzzles range from arranging cogs on a board to operate switches to picking locks, arranging pipes to turn off poison gas, and operating electrical boxes to re route power to doors, all take place in a mini game screen and usually you are given a sometimes harsh time limit to solve these puzzles that do get a bit stale. Not so bad when it is just the one, but when you have to solve many puzzles and fail at the last hurdle it is frustrating to have to re do them all again, especially when the puzzles seem to be random each time.

It is weird that the main niggle I have with the game isn't how it plays, or controls but more on the impossibility of the whole thing. The asylum is absolutely huge, it is full of spike traps, TVs, poison gas, bombs and barbed wire. In short it would have taken a small army to get the place decked out like it is. This also applies to the people captured. At least 50 I would say are there, far more than in any of the films, just thinking about how silly it is that all this could happen did take me out of the experience a bit. I did like that enemies have a legitimate reason for wanting you dead, the idea that each enemy is a trapped soul who can only win their own game by killing you was cool, some enemies don't even attack you; some commit suicide, others forlornly watch you pass by and all around their are torture rooms containing people who failed their initial game of escaping. 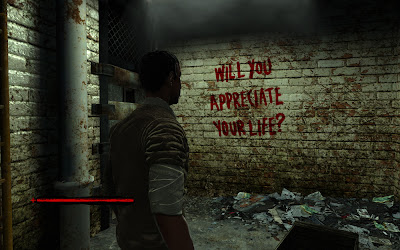 The people you face are all very weak, one stab with a scalpel or one shot with a revolver is enough to kill most any enemy. To spice things up some enemies are strapped to explosives and will chase you down while others proximity to you is enough to start your explosive neck brace beeping (you wear this for most the game) so you must get away from them until their own neck brace explodes. Some enemies are blind and react via sound while a Silent Hill style Pyramid Head character (in the shape of a huge person wearing a pig mask) frequently appears in the background to kill off people and generally gets in your way.

Saw is split into around 7 levels each in a different part of the asylum though it kinda looks all similar anyway. Locations range from the cafeteria to theatre, library and cells but there is not much variety. Each level has Jigsaw tasking you with rescuing someone from your past whose life you have affected, including the wife of your partner who died in the Saw film, a reporter who accused you of being the Jigsaw killer, a victim you rescued from one of Jigsaws games and more. The voice acting is pretty terrible though, all these characters just sound angry and annoying, you would expect the situation they are in they would maybe be scared instead? A bit silly to be honest and another thing that drew me out of the experience. 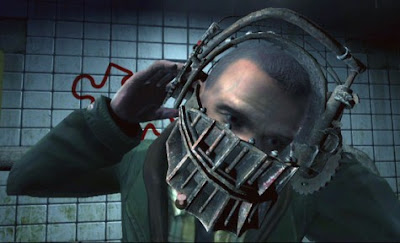 It is quite a dark and grim game, it evoked memories of Manhunt for the sense of being played by an unseen voyeur, and also of Silent Hill with the grimy look of the setting but doesn't manage to be as good as either. The Saw films are described as torture porn and the game seems to go for a similar vibe, many times you have to fish keys out of a toilet full of needles, or stick your arm in a barrel of acid for a key for no real reason, speaking of which you sustain vast damage doing this but quickly vanishes after a moment, another silly little thing. It got to be quite formulaic but despite that I could not stop playing as it is all mostly so easy and entertaining enough that you just slide through losing hours to it. It all leads up to a bleak ending that was something I totally thought it would be. I don't like the Jigsaw killer as a character, and everyone in the universe are super annoying so never cared for them.

Levels are full of tripwires and rigged doorways meaning you have to be ever vigilant, didn't stop my head suddenly exploding as I set off yet another shotgun due to my haste. Also you spend the entire game shoeless so broken glass on the floor must be avoided. Why Trapp didn't take the shoes of any of the people he kills is beyond me. 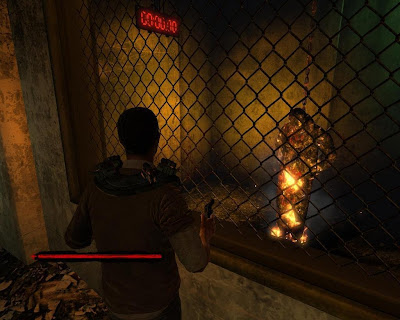 Obviously Saw was never going to be a must have title, and it is designed to appeal to fans of the series but as a videogame survival horror it does enough to appeal to horror fans even if it does not excel at anything. I will probably pick up the sequel soon enough as that is also cheap as chips now.

Posted by Daniel Simmonds at 08:02