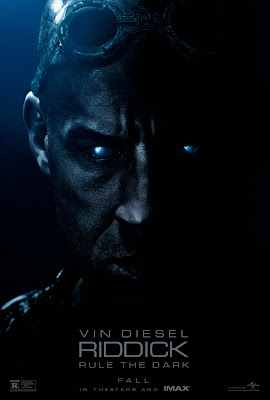 I made it my mission earlier in the year to watch and play all the Riddick content available in order to be up to speed for this new entry in the on going saga. Taking place following the events of The Chronicles of Riddick this is in fact more a sequel to Pitch Black and at times often feels like almost a remake of that. Slight spoilers ahead but I always try not to reveal anything.

The film starts with a badly wounded Riddick (Vin Diesel) on a hostile planet where every single piece of wildlife seems to be after him, a flashback reveals he was betrayed by the Necromancers (who he became leader of in Chronicles) and left for dead on this planet. Several years later and he has fully adapted to the harsh world, with home made weapons, and even training up a wild Dingo like creature as a faithful pet. Coming across an empty mercenary outpost he activates the distress beacon he finds there where his status as a wanted criminal brings down rival groups of bounty hunters both aiming to capture him. This begins a war between them and Riddick, but unknown to the mercs there is a far greater danger than the escaped convict on the planet. 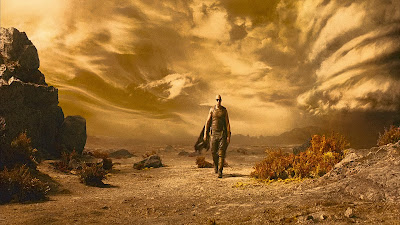 Chronicles was very over the top and bombastic full of special effects and a giant cast, here it has really been dialled down, a much lower budget which brings it more in line with Pitch Black and gives the film a more gritty, primal feel than the ultra clean sets used previous. Riddick is in his element on the wild planet, well he is his usual moody self but the scenes of him interacting with his pet creature give him a more friendly side than has been seen before. The character of Riddick has always come across as far too serious and silly but here he even manages to seem cool at times. this does then gets let down by bizarre out of place misogyny towards the only main female character Dahl (Katee Sackhoff best known as Starbuck from Battlestar Galactica). Here finally Diesel gets to be Riddick as he always imagined him to be, rather than his usual method of trying far, far too hard to be an iconic rebellious character, though that isn't to say there are plenty of moments where you can tell he really thinks he is being badass when he almost embarrassingly isn't.

Finally there are decent creature effects, the monsters of Pitch Black were ok looking, the dog creatures in the prison section of Chronicles were truly awful looking though. The wildlife of the deserted planet all look pretty decent, and decent effects really go for a lot of things, maybe not some of Riddicks more outlandish moves but is all fun. The planet itself looks fantastic as well, some wonderful rain sequences later on. I have always appreciated the grimy, dirty style of machinery and buildings in the series, it is always consistent, here is no different, all looks rough and lived in. 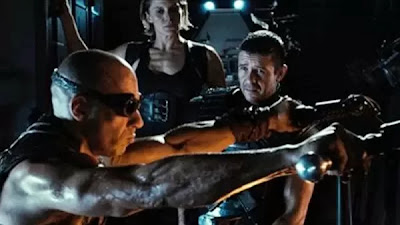 The acting and script is not bad, it is quite funny at times, and the film has three distinct acts which all give a different feeling to the film. The first act of Riddick alone is great because of the sole focus on him and his battles in the wilderness, a silent Riddick is a much more fun one to watch. Act 2 sees his battle with the two very different merc groups. One; a ragtag bunch led by Santana (played fantastically by Jordi Molla), the other a more serious military style outfit led by someone who has a connection to Riddick's past. A lot of humour comes from Santana who is truly a nasty character but who spends the film having comically bad thing after bad thing happen to him. The final act feels like a homage to Pitch Black, even having the same sort of character types, though this does seem to drag on slightly, the middle act being the most fun. While some characters are great others don't have much personality to them, Dahl is token hard girl, while most the mercs are just meat bags there to be killed, fun to see the wrestler Batista appear though. Matt Nable as the boss of the second merc group is very good also, he gives some real believability to his role as a father.

Riddick is really quite violent in places, the most gruesome one to date, memorable scene of someone getting pierced through the stomach then lifted up and their head bashed repeatedly to almost pulp against a wall, later there are messy executions where blades get stuck in characters mid slice, and a cool decapitation that looks great, action in general is much better than in previous instalments, the gritty setting helps and smaller, contained story cuts off the chaff that the over blown Chronicles could have benefited from. A few scenes of female nudity that feels tacked on for no real reason, this includes Sackhoff's character which was bizarre and unneeded I felt. 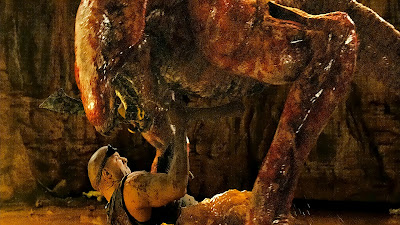 The best film in the series; a desperate Riddick on the run, hunted both by human enemies and creatures on a harsh empty planet shows Diesel performing his role at his best so far.

Posted by Daniel Simmonds at 02:35

Good review. You know what to expect from a movie starring Vin Diesel, so expect this one to be stupid and fun. That's all.