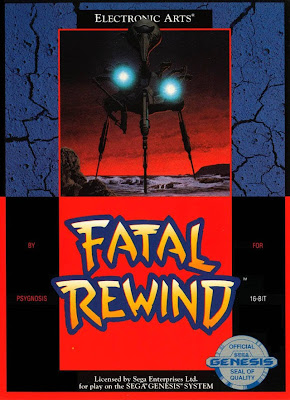 As a teen Fatal Rewind was one of those games that I would spend hours studying screen shots for, It was even featured on the classic 'to be this good takes Sega' advert as an early reason to get a Megadrive/Genesis. Fatal Rewind was in fact the Amiga and Atari ST game 'The Killing Game' released a year previous that had two levels chopped off and a name change for it's console outing.

In the future there is a popular TV show called The Killing Game in which participants are forced to enter with the reward for winning the game being freedom. You play as one such contestant. Wearing a mech suit your goal is to forever advance upwards through the sets avoiding the ever rising acid river and also dispatching the many robots programmed to kill you. 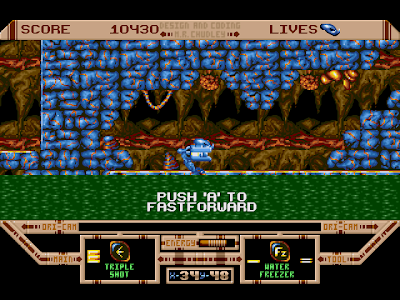 This is one tough cookie, you collect power ups that can be used to change the gun you fire but there are also key cards you need to get to progress which take away what ever power up you currently own. The enemy design is quite bland with floating groups of squares and circles, your mech is quite cool, able to jump kinda high and also able to scale walls with ease. Each stage is split into 2 acts, all stages themed on different things. The first stage has a futuristic look to it for instance while later stages have an underground cave, Greek temple motif and more.

As a 16 bit game it really does hold a special place in my heart, it is still as fun and challenging to play as ever and has a great tune playing even if there is only the one tune throughout the entire game. Special mention must go to the novel replay feature. When your mech explodes and you die a replay is shown, a replay that lets you take over at any point meaning you don't have to do the whole stage over, kinda cool!