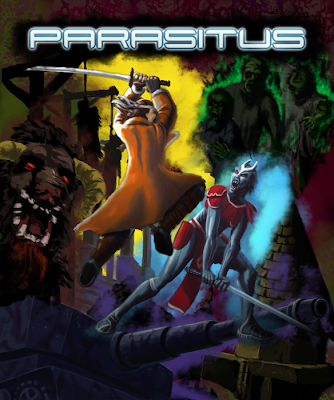 Parasitus: Ninja Zero is a 2D side scrolling fighting game which has the look and feel of the classic Castlevania series of games but with more fighting much like BloodRayne: Betrayal did. I always feel comfortable to review the lesser well made, or more generic X-Box Indie games but better ones like this not so much as it feels like there is lots I did not see in the all too brief demo.

No idea what the story is, I guess you play as Ninja Zero. In the demo of the 2nd level I got to play I was storming a castle full of zombies, zombie dogs, and demon creatures. There are many different levels in the stage, just like Castlevania, but in the traditional sense, there were no multi route levels like the later Metroidvania style ones. 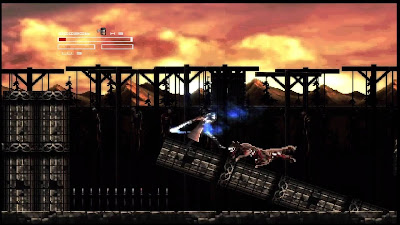 The game is heavily pixalated which give a fantastic old school look to things, enemies spurt out blood when you hit them, you yourself explode into blood when killed. Armed with a sword you slash up the monsters and attempt to block their attacks. It was quite unforgiving, each time I got to the end of stage boss (possibly) before getting decimated, quite tricky to block when you are being assaulted from multiple angles. The Ninja Zero guy moves fast, has trails like Alucard in the almighty classic Symphony of the Night had and is fluid to control. Him and the many enemies all look great and have plenty of animation. There is some platforming but for the most part this is combat focused, even going as far as too rope you in levels until all the enemies have been slain. Later levels promise huge boss creatures to fight.

As you progress you unlock different moves, wall jumping is a given from off the bat and special attacks can be used by filling up a gauge. Music fitted the tone of the game well. Basically I loved this game, it looks great, is very fluid but also very unforgiving and tough. At 240 Microsoft points this was more than I can currently afford, but as an endorsement it has gone on my list of games I want to buy some day. The worst thing I can really say about this is that the title and cover art are very lame, put me off even wanting to try the demo for the last 2 years.