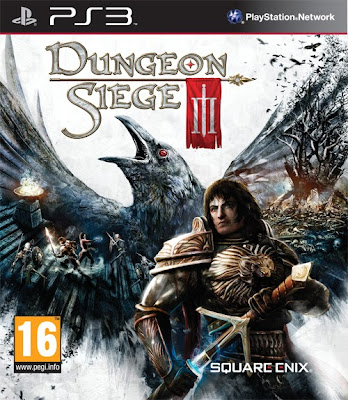 Dungeon Siege III is an RPG from Square Enix, I had never played the previous Dungeon Siege games but thought it would be an isometric hack and slash loot fest style game much like Torchlight was. I was pleasantly surprised to see there was a lot more to this game as it has plenty of interesting side quests, conversations, and Mass Effect style dialogue choices that seem to have the ability to drastically affect how the game plays out.

30 years previous a commoner girl; Jayne Kassynder seen as a Saint by the Church of Azunite rallied the people of the land of Ehb in a battle to wipe out the heroic 10th Legion which had protected the kingdom for over 400 years. She accused them of killing the King and with huge support every single last Legionnaire was wiped out or so it was believed. A remaining member; Odo has kept protected all the children of the Legionnaires and plans a meeting to resurrect the lost group and retake the kingdom from Jayne who has been fighting an endless war against the new Queen. The meeting is ambushed though with the majority of the descendants murdered, just a couple survive the ambush including the player character who is either Lucas the Knight, Anjali an Angel like being, Reinhart a mage, or Katarina a half witch who fights with firearms (the character I chose). 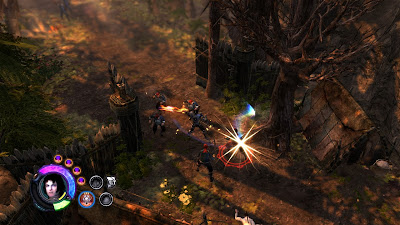 Dungeon Siege certainly has some budget issues that mean it is not of the standard of 'triple A' games. The voice acting is pretty average with an echoing effect making it sound like everyone is talking via a mic. Character models are not in huge abundance, it is easy to see that a lot of people you meet are the same character model with just facial hair changed to give the impression of someone new. The huge set pieces the game attempts are reduced somewhat by sometimes average graphics and an engine that doesn't allow too much stuff to occur meaning key events either happen off screen or shown via admittedly nice looking drawings with a voice over giving information.

Locations are nicely detailed and have character to them, from the huge city of Stonebridge to the Dwarven mines of Glitterdelve each look distinctly different it is just a shame that camera control is limited in such a way that your unable to lift it high enough to get a decent look at the locations. On the subject of fiddly things the item equip and level up screen is a bit of a hassle as you are only able to equip items to the two characters currently in your party, your supporting character must be switched out to equip others which was a hassle when your inventory is full up. 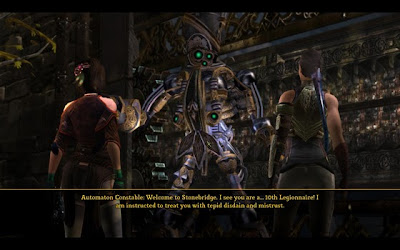 Yet for all these small issues I did actually have a lot of fun with this game, the story may be quite simple and not very original or exciting but there is a charm given to the game with it's odd placed humorous moments such as the sarcastic automaton constabulary of Stonebridge who speak in posh English accents and the Goblins obsessed with cats. Side quests are plenty and not at all boring and while there are dungeons as the title implies you also get a variety of different places to fight in such as a tribal village in the swamps, a haunted mansion, and an iron smelting foundry among various others. You get access to 9 different powers per character which can themselves be levelled up in various ways such as the ability to summon a magical fighting dog, or various types of stat boosts. It is fun to choose how you level up your character. Enemies are varied and plenty, from the usual assortment of human foes to witches, cyclopes, ghosts, robots and giant spiders, though no zombies! Bosses are also in abundance and you often get to speak to them afterwards to decide their fate which brings me onto the favourite part for me.

By the choices you make story beats are vastly different, for instance beating one of Kassynder's Angel Generals early in the game I was given a choice on whether I wanted to kill her, imprison her, or let her go. Much later in the game I was able to see what a huge difference my actions seemed to make. There are many such moral quandaries such as this throughout Dungeon Siege, another example is an errant mage who has been planning the destruction of a city and its people. Do you have him executed and please the city folk, or do you take him into your own custody so that he can teach you all the ancient magic he knows? These choices lead to vastly different end sequences. Sure most the choices you make only get looked at in the ending but it gives the game replayability. 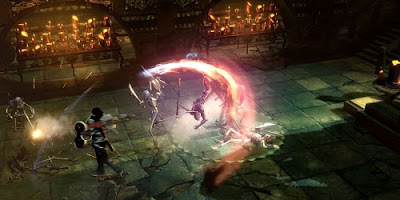 I played this in single player but it can be played with up to 4 players, as it was I was on normal and did not get a game over screen once, the friendly A.I was actually competent and always quickly revived me when I was killed in the later sections of the game. Dungeon Siege III surprised me, it was a lot better and involving than I expected. A solid 12 hour RPG that doesn't do anything too different but what it does do it does so competently.