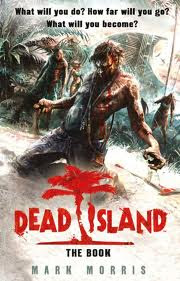 Dead Island the book is based on Dead Island the videogame which was a co-op zombie survival game released back in 2011. Going by the Resident Evil series of books written by S.D Perry I expected a trashy, often boring A to B style mess. Some minor spoilers for the game here so beware!

After a zombie outbreak on the tropical island of Banoi four survivors who discover themselves immune to the strange virus are united by a call from a mysterious individual who promises them rescue if they can get to his location at an offshore prison complex. What follows is a hellish battle against the undead as cocky Logan, rapper Sam, Chinese spy Xian Mei and ex Australian cop Purna head across the island of the damned to reach their alleged saviour.

Dead Island the videogame did not have much in way of plot, after a bizarrely detailed intro spiel for each of the four characters they were pretty much shunted all over the island via a series of fetch quests with no personality given to any of them. Morris finds a way to include the origin stories for the four but again it seems to serve no real purpose, not his fault. What Morris does thankfully is give the characters actual personalities and re-creates events from the game with more depth than just 'kill everything that moves'. Being such a fan of the game I feel the need to discuss the main differences.

The game has far more survivors, most of which are written out to streamline events, an early example is the lifeguard Sinamoi who was surrounded by loads of fellow survivors in the game but in the novel he is alone. Zombies are still in massive abundance but only in certain areas, the whole jungle area has barely a single zombie in it, while the super zombies do not appear at all anywhere on the island. Vast sections are ignored for the book, e.g the rich people holding out in the mayors offices are not mentioned at all, nor the return to the hotel either or virtually all of the human enemies apart from a couple of ragtag groups.

As I previously said the four characters are fleshed out far more for the most part. Logan and Purna in particular have a proper character ark, Logan starts off as an utter jerk but really grows into a likable character. Serious Purna at first has no desire to help anyone but herself but through a series of events comes to want to protect those that deserve protecting. Sam is just a stereotypical nice guy, while Xian Mei is pretty much a blank slate not having much personality at all. Side characters such as Jin get more time to develop, though the mysterious Ryder White remains just as empty as his videogame equivalent.

There is tons of violence here, the details of the state the zombies are in is always described with relish, and the violence inflicted on them is also spoken of in detail, lots of zombie action here. What was a change to the typical undead story is that the group of survivors are immune, so many times they find themselves being chomped down on by the ghouls. Also I found different than the usual zombie tale is that the monsters don't react to sound, they need to see, or maybe smell fresh meat to react so the survivors are able to drive around in vehicles with relative ease.

Dead Island is a very easy book to read, it is not remotely complicated with often quite simple writing in its 334 pages that mean you can just blast your way through it, it is always fun and never feels like it is just ticking off a list of plot points and locations but actually giving you a story that is far better than what you are given in the game even if covering the same bases. Some dark themes are introduced also, rape seems to be a big topic, crops up quite a lot, uncomfortable reading, the old adage of humans are always the real enemies, zombies just victims. Also added here are a variety of zombie children which was a nice touch. The zombies much like the game are of the running variety and can be destroyed in the good old way of destroying the brain.

I had a lot of fun reading Dead Island, big thanks to my friend for buying me a copy. Despite knowing exactly what would happen it was still a good read, just a shame the restrictions of the established game lore led to a conventional end sequence and the huge cliffhanger it ends on left me wishing things had been wrapped up more nicely especially as a novelisation of the next game in the series Dead Island: Riptide was never written.