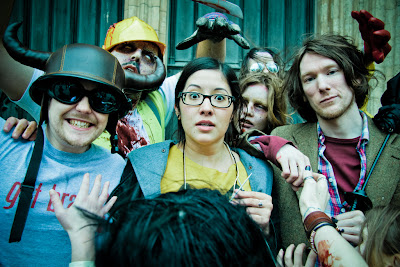 Wow, a momentous day as I have reached the end of my outstanding news posts. All that's left now is a massive list of films, books and games to review.

Apparently Zomblogalypse is a cult British comedy web series, I have never heard of it before to my detriment I'm sure. It was about 3 young survivors of a zombie apocalypse in York who blogged about their experience to relieve the boredom. The episodic format has been broken down and a feature length story created around the 3 characters played by Hannah Bungard, Tony Hipwell and Miles Watts. Such greats as Tom Savini (special effects genius), Dominic Brunt (Before Dawn) and Marc Price (Colin) are counted among the shows fans.

Back in April crowd funding was being used to get the funds to go into pre-production of the feature film, as I am so behind with this news I do not know how that is progressing...however I have just watched the first episode.

Part video blog and part handheld camera shenanigans it wasn't bad, I have it told that it does improve and you would expect it to do so as shows usually improve with time. Lots of apathy and stupidity seems to be the comedy element. The whole show has been running since 2009 and has 4 seasons, each episode roughly ten minutes long and can be seen on YouTube or at the Zomblogalypse site. Anyway wish them luck with getting the film made.
Posted by Daniel Simmonds at 10:05