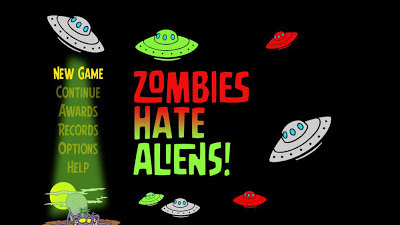 Maybe it's due to the exclamation mark in the title, or maybe it is due to it being a X-Box Indie game but I wasn't prepared to give this game much of a chance.

It isn't actually too bad, at least it is programmed well enough. You play as a group of zombies recruited to fight a war against aliens, chosen as your the only zombies with still attached trigger fingers. The aliens used to be your allies but have launched an attack on the Brain Bank (where all the brains of the killed humans are stored I guess). Your group of zombies control a cannon that can fire a variety of things at the flying saucers. 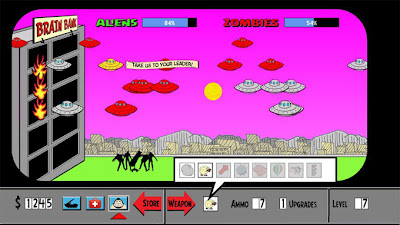 Zombies Hate Aliens! is bright and colourful and has a fun vibe to it and good presentation but it's when you get into the game that things go a bit south. The zombies you control are all silhouettes, the flying saucers have no animation to them, when shot with your ammo (in the demo I had access to rocks and fireworks) they just vanish, no animation to them, no sound effects, they just go. Ammo is limited and has to be purchased using cash gotten from destroying the suicide saucers that just seem to be crashing into the Brain Bank when they reach it.

I got bored with this game very quickly, there just is not enough variation and no amount of bright colours and jaunty mission briefings can change that.