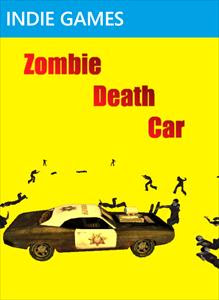 Well at least this game does something different. Unlike a lot of the zombie X-Box indie games this one has you driving a car rather than controlling a guy with a gun.

Your mission is to stop the zombies eating the red square. Not quite sure how they would eat a red square but there you go. You control a police car in a square arena that has a red square in the centre. Zombies appear at the sides of the square and run or walk towards the centre. If they get there they disappear. Too many reach the centre and it's game over. 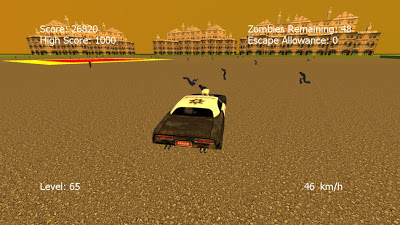 I had fun to begin with, the generic music recalls that of old Amiga games, the car has a good enough engine sound and hitting zombies gives a satisfying sense of impact. At first the zombies were few and far between. It was very easy to knock them over, this only lasted a few minutes though. After around 2 minutes lots and lots of zombie spawned in and I was quickly overwhelmed.

The problem with the game is that your car doesn't react well to hitting zombies. Most times after impact my car would spin around 180 degrees making it irritating to get back in control. Likewise hitting the boundary of the square caused my car to go mental, trying to flip over but unable to do so. The graphics are really bare bones and have no character to them. 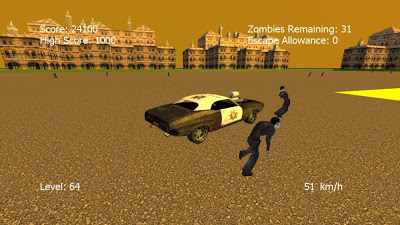 Zombie Death Car tries something different but it fails as it is just too bland and generic. Another one that I really cannot recommend.

Yeah, this one doesn't seem too intriguing. Great write-up though, I enjoyed the read.

I really like this page, it's pretty badass man. I been looking for some good horror blogs and there's really not too many around. I just followed you and I'm number 99 haha. One more and you're at 100! Great site, keep up the good work.

If you wanna chat horror films, swing on by.

thanks for the kind words :)I'll check out your blog