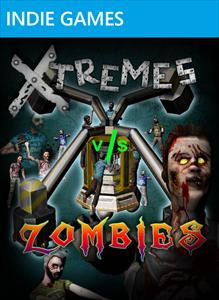 Wow, the X-Box Indie games channel really is a place where dreams come to die. Xtremes vs Zombies is a perfect example of why the channel is for the most part ignored by sane people.

A very badly written Star Wars style introduction reveals that in 2012 the world we came to know ended. The hundreds of survivors discovered zombie apocalypse had swept the globe. Now to protect their valuable Gene Banks (whatever they are) from the undead they have created giant vehicles known as Xtremes. 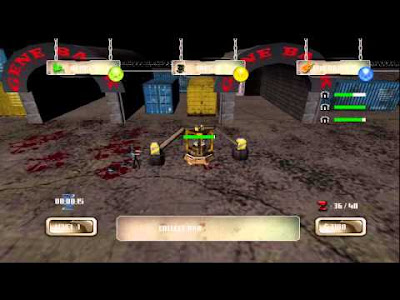 Now, where to start? The game looks abysmal, it would look bad on a PS One. Lots of browns and greys in the dreary looking arena style place you are in and only only the one zombie type; a zombie wearing a blue shirt repeated to infinity. The soundtrack consists of an annoying tune repeated every five seconds, again to infinity. The 'Xtreme' is a large vehicle that has two heavy weights on arms that can smash down and squish zombies. This is all well and good but the main body of the contraption has no effect on the undead, you just sort of glitch through any zombies while losing health. Squishing zombies gives you a little 'aagh' sound bite, fantastic.

For the most part you just hang around the 3 Gene Banks squashing zombies, and buy power ups to help you kill them more effectively. That is about it. nothing worth seeing here. Not only does the game look like crap, and sound terrible but it is 'Xtremly' boring. I need to go cleanse my soul from having wasted precious life seconds on this travesty!