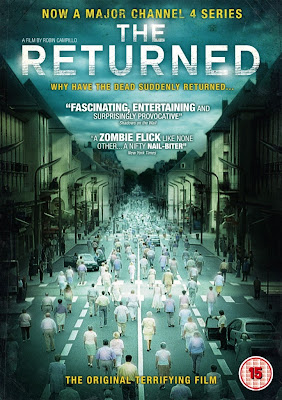 Originally released in France in 2004 titled 'Les Revenants' and previously known in English as 'They Came Back' (a superior title that instills more dread in my opinion). Then an apparently successful Channel 4 series based on the film called 'The Returned' was created, so it isn't hard to see why the DVD release of the original film has had its English title changed to The Returned. Now I have never heard of the channel 4 show but may be forced to see it now I have seen this bizarre film.

A worldwide event occurs in which seemingly everyone who died in the last 10 years mysteriously comes back to life, arriving back in droves, no injuries, no decomposition and wearing fresh clothes. The Returned takes place in a small French Town where 13,000 have returned. 60% are 60 years or older, 40% are 40 or over while the remaining 10% are the rest. There is no explanation for the dead peoples return and they seemingly have no memory of where they have been. The local government arrange a centre for them to be processed so that they can reintegrate into society. The dead however are changed, behaving strangely as if they are not the people they once were and instead are just imitating and pretending. At night the recently dead meet up for mysterious meetings. Just why have they returned, and for what purpose sinister or otherwise?

This is an arty film that leaves far more questions than it answers. If your expecting a nice resolution then you will be disappointed, I can tell you now if your asking yourself 'Why have they returned?' or 'What on Earth is happening at all in this film?' then you be left wanting. As The Returned progresses the questions I had just increased, the artiness ramps up leaving a confusing end that makes little sense.

I would class the recently dead in the film as zombies but be warned there is no gore or even violence here. The opening sequence showing the dead returning is fantastic and sets up the film well, the people, mostly old slowly walk down empty streets as the normal people look on at them in shock. The dead talk and can do things but they are mysterious and exist in a dream like state. They have memories of their lives before they died but seem caught up in these memories and are unable to adapt to their new lives. It is suggested the dead peoples trance like zombie state is due to them being unable to process the transition of living again yet the weird night time gatherings hint that maybe they are more aware than they give on.

The plot mostly concerns three different groups of people. You have the old Mayor of the town whose wife has returned and is creeping him out. You have a couple who get reunited with their young boy, and you have a wife reunited with her dead husband (with scenes of necrophilia). The towns people seem more shocked than anything, none of the hatred and anger I was expecting but this goes with the general melancholy tone of The Returned.

Like the dead themselves the film has a dreamlike quality to it, there is no joy or fun to be had here, it is all bleak and bittersweet. Having your dead loved ones return to you but in such an altered state would be heartbreaking. Saying that the dead I found to be quite irritating and very evasive at answering any burning questions, hard to feel sympathy for them, or for the local government who seem intent on forgiving the slow witted returnees faults. It has the feel of a documentary at times as it frequently goes back to Town meetings as people discuss what they have learned about the returned. 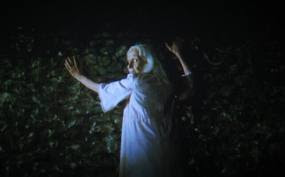 The film is in French with English subtitles but there isn't that much dialogue anyway, plenty of long shots of people walking around with sombre music playing. The Returned is out on DVD on 22nd July for £12.99. If your a fan of the show then you must see how it all started. If you go in with patience and knowledge that it isn't some schlocky gore fest then there is enjoyment to be had here.

Posted by Daniel Simmonds at 15:25