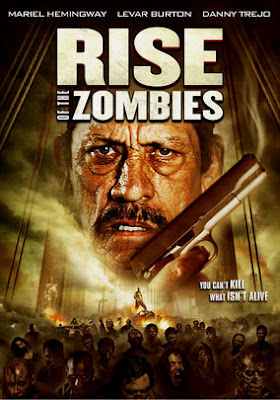 There are so many zombie films out there that I can be forgiven for having never heard of this one before today. The cover is dominated by Danny Trejo's head, obviously the films big star (the guy has been in a ridiculous amount of films and TV shows, everything from Breaking Bad to Halloween and The Devils Rejects). What is also obvious is that the film makers couldn't afford to hire him for the whole film as *spoiler alert* he is killed off very early on into Rise of the Zombies. Anyway, onwards with the review.

Zombie apocalypse has swept at least America, a water based infection it seems. A bunch of survivors are holed up in Alcatraz Prison, San Francisco. One of the survivors is Lynn Snyder (Mariel Hemingway) a scientist whose colleague working in the city may have come up with a cure to the undead virus. Not long into the film zombies over run the prison causing mass chaos and death, with just one person staying behind to do his own research into the cure the rest flee by dingy to the mainland where they split into two groups. Snyder wants to head into San Francisco to find her scientist buddy's work, while Captain Caspian (Trejo) wants to head to a safe zone the radio talked of. Both go their separate ways and both groups encounter many zombies... 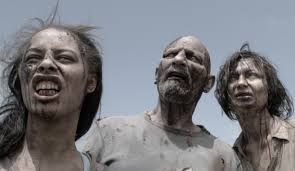 For a lowish budget straight to DVD film there are a few cool actors here. As well as Trejo you have a main trio of characters that include Ethan Suplee (My Name is Earl), and Chad Linburg (Ash in Supernatural). There are hundreds of zombies, they have various states of make up on them, some have prosthetics for fun head crushing, others are legless and crawl along with their insides trailing behind. One of the blurb pieces spoke of this as The Walking Dead with more violence and I can kind see that, initially I did think it had a The Walking Dead style look to things.

Rise of the Zombies is a jam packed zombie ride, it seems no one can walk more than a few paces before hordes of zombies show up, sometimes to silly effect though. On the boat ride over to the mainland swimming zombies suddenly appear, I do not know how they managed to locate a solitary boat in the dead of night. Later while crossing the Golden Gate Bridge in what is the most stupid part of the film legions of zombies quickly crawl up the bridge supports like ants or something to attack the humans. That scene in particular is so stupid as later on in the film zombies are unable to climb over a fence that is literally only 7 foot tall. Zombies only seem able to run when the film calls for it, tense battle in a narrow corridor sees them almost charging, yet later scenes out on the empty streets of San Francisco the ghouls stumble around as if they have all the time in the world to catch their prey. 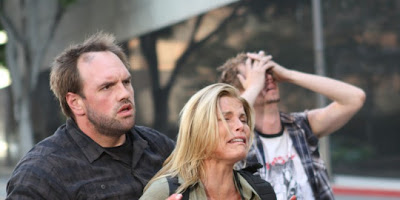 As is often the case with zombie films nowadays there is a hell of a lot of CGI effects used. Gunshots as you would expect but also really weird CGI used to show a helicopter in the air, a jeep crashing down a hill, and a tram crash that results in a hilariously bad and over the top explosion. Jeez, the explosion effect is the worst and there are plenty of them. I get that these big stunts could not be done for real, but the CGI is so obvious that it rips you out the film a bit. A scene in which a character goes through a Saw style self torture situation was so gruesome to watch that I admit I shielded my eyes with my hand! So not all effects are bad.

The plot is extremely bare bones, it is just there as an excuse for the characters to fight lots and lots of zombies. There are sub plots that go absolutely no where and just seem pointless. For instance the film kept going back to this one character as if there was going to be some importance to him, but no, eventually he just dies bringing nothing at all to the main events of Rise of the Zombies. I think the main problem with the poor story is you just don't care. The characters are not very likable or interesting, their goals are boring and their actions make you scream in frustration with what idiots they are all being.

There is nothing new here, yet Rise of the Zombies is better than average, I could see myself seeing this again whilst drunk or with friends as a film to watch with your brain disengaged. So a six out of ten then, but a respectable six. There are far, far worse zombie films than this, no new ideas but you get lots of zombie action.