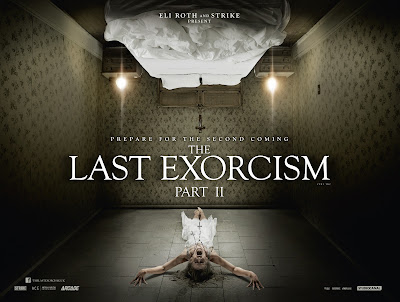 I quite enjoyed The Last Exorcism, I thought it was an interesting take on the possession tale and really enjoyed the curve ball the film threw the viewers at the end. I was surprised when this sequel was announced though. Where the original was created as a documentary this is a straight up traditional horror.

After a very bad recap of events of the first film we find Nell in a state of extreme shock and with no memory of the events that have happened to her. Some time later and she is living in a shelter for women slowly rebuilding her life when strange events start to occur, mysterious people stalk her, she has horrific nightmares and hallucinations. The demon that tried to possess her in The Last Exorcism still wants her and is determined to make it so. 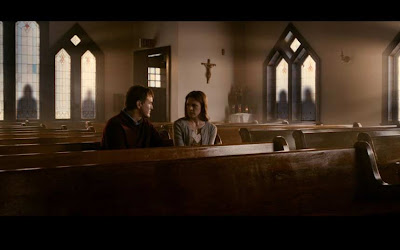 For the most part Part II is kinda boring, I had the entire cinema to myself and found myself texting a friend halfway through, not paying much attention to it. A lot of the scares come from the tried and tested jump category, they never failed to make me jump but when this is the only way a film maker is able to create fear you know they are doing something wrong, just look at Sinister to see how to make a real terror that gets under your skin.

Ashley Bell as sheltered teen Nell does a good job but the similarities between her and Sissy Spacek's role in Carrie are quite close and they even have a similar character arc which is a tad distracting. Other characters are not so great, in fact there isn't a single memorable character other than a great turn by David Jensen and E.Roger Mitchell as two odd ball psychics who sadly get small screen time. 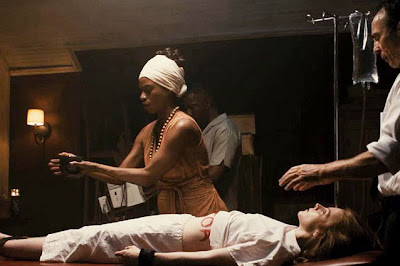 The film has 'exorcism' in the title yet the actual exorcism takes up less than ten minutes of screen time and comes far too late, most the film is Nell wandering around trying to lead her life while ghostly visions of friends and family haunt her, and some demon tries to get her to have 'sexy times' with it that must also be an allusion to her sexual awakening happening as she becomes a woman. There are a few demonic possession scenes but these are not anything special with it just being humans given 'demonic eyes' that wouldn't look out of place in your average episode of Supernatural. The ending section is enjoyable enough, though does reach too much for the WTF ending of the first film. It sets itself up for a third film which I really don't think is wise when this film was not that good.

A boring, albeit well shot and directed film about possession that fails to get the blood pounding or the skin crawling. There wasn't really any need for The Last Exorcism Part II to exist.