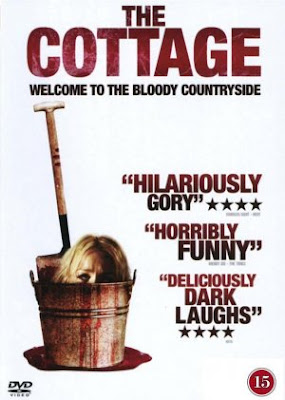 The Cottage is a British made horror flick that has a handful of great actors in it. Andy Serkis is a fantastic one, and Reece Shearsmith is a master of dark comedy. The trailer to this film did not make me want to see it but it does accurately reflect the tone of the film.

The Cottage starts with two brothers; David (Serkis) and Peter (Shearsmith) arriving at a cottage in the English countryside after kidnapping Tracey who is the step daughter of David's rich boss in order to get £10,000 as ransom. The boss's son Andrew is also in on the plan but unwittingly reveals to his boss's men the location the kidnappers are at. During a comedy of errors the kidnappers all get accidentally revealed to the kidnapped girl and eventually Peter ends up being in turn kidnapped by her and taken to a remote farm house. Exasperated David and dozy Andrew head off after them. The owner of the farmhouse however is psychotic and all four find themselves in mortal danger from the leatherface lookalike. 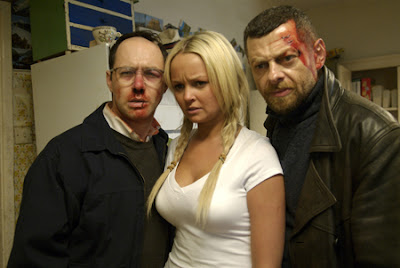 This is quite a disjointed film with distinct feelings to them. The first half is a dark comedy, the whole kidnapping situation is quite funny, every single thing that could go wrong does go wrong; Peter keeps accidentally calling his brother by his name in front of the girl, she keeps escaping and beating the trio up, the ransom money Andrew thinks he has gotten is actually a case full of tissue paper, and finally Peter and Andrew walk in on Tracey forgetting to put on their balaclavas. All funny stuff in a dark sense. Peter and David are not heroes, but neither are they true villains, they have goals they want to get and have no intention of actually causing the girl harm.

The 2nd half of the film can only be described as grim and violent, almost to torture porn territory, each of the four characters gets terribly injured right off the bat; one gets half their foot sliced off, one is stabbed through the stomach, one gets their leg caught in a bear trap, while the last gets a pick axe through the leg all relatively early into the battle against the psychotic farmer. For the most part this part of the film is far more serious with a misguided attempt every now and again to inject some humour into things but which feels out of place. The effects are well done and really made me grimace. 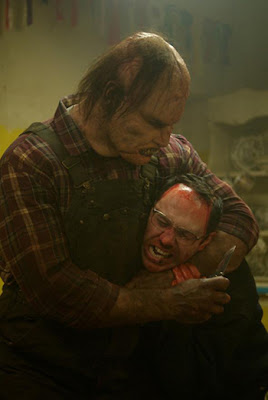 It really doesn't seem like the two half's gel together well, almost like the director couldn't decide if he wanted a comedy or a horror and not settling on either very well. I can't complain about the effects but can about the lazy plot, nasty characters (Jennifer Ellison as Tracey is super irritating) and bad guy who just doesn't come across as that exciting a villain. Not a bad ending it has to be said though.