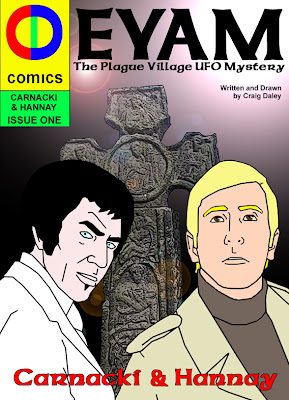 Craig Daley is someone who puts a heck of a lot of research into his comics that often border on the surreal such as Football Crazy and Meadowhell. Eyam: The Plague Village revolves around the idea of UFO's.

In 1665 plague broke out in the English village of Eyam. To contain the plague the villagers willingly put themselves in quarantine for 14 months in which time 260 of the 350 villagers succumbed to the disease (this actually occurred in real life by the way). The comic takes place in 1965 where Jenny Taylor returns home after a night out in Sheffield to discover the village is deserted. Amid reports of UFO sightings the place is closed off by the military, paranormal expert Carnacki is called in and teams up with MI6 agent Hannay to solve the mystery. 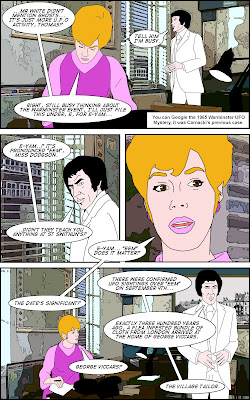 As usual the art style is so bizarre and unique that it remains one of the selling points, at times it looks like photos have been used and 'comic'ed up' to fit in with the bright primary colours. Real people are used for some of the characters, and again real information used, specifically about the governments UFO agendas of the 1950's and 60's and the plague of Eyam of 1665. This is part one of two so the reason for the townsfolk missing is not revealed but I'm sure as usual it would be something quite clever and left field as that is Daley's trademark.

At 37 pages Eyam is a entertaining read and leaves you wanting to know more, it can be found at Amazon and other places for download at the cheap price of £1.28.

Posted by Daniel Simmonds at 02:14