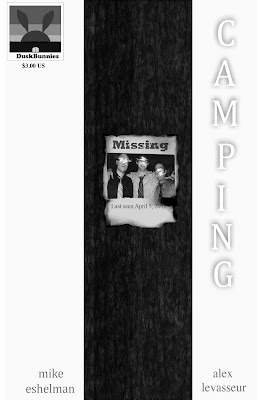 Camping is a short 20 page indie comic from DustBunnies comics. Originally it was planned as a short film but adapted to comic book form as it was felt it would be better suited.

Three men have gone hunting in the woods but have gotten lost. They sit around their camp fire drinking beer and talking about how anyone could have gotten lost and how they will be rescued soon enough...but is everything as it seems? 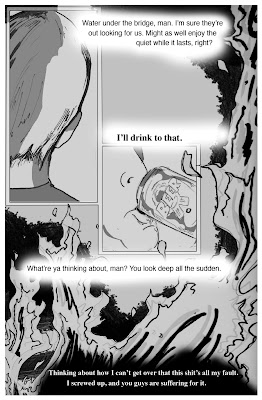 This isn't going to be much of a review as I can't really say too much without ruining the surprise. The tale would feel perfect in a horror anthology and has a great last few pages twist to it that was the perfect icing on the cake. At first I thought the text was a bit off but there is reason for that, and the extreme close ups of objects and the characters gives a slow reveal. The black and white art is well suited and the dialogue is actually well written.

Camping can be purchased for download or physical from the Dusk Bunnies Comics website here for $1 or $3 respectively. Good stuff!

Posted by Daniel Simmonds at 06:55