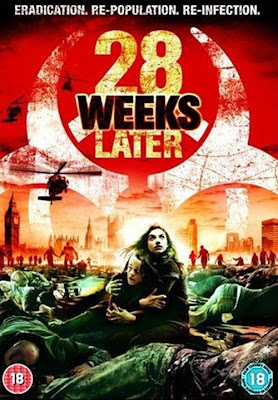 Having recently watched 28 Days Later I just had to watch the sequel. This had stuck in my head as the better of the two films, having not seen it for a while would I still think this of it?

Don (Robert Carlyle) and his wife Alice are hiding out in a countryside house with a bunch of other survivors post rage virus outbreak. The arrival of a panicked child brings disaster as the house gets invaded by a horde of crazed infected. During the chaos Don abandons his wife to save his own skin. 28 weeks later and the American army have started the process of reintroducing people to Britain after all the infected have died of starvation. A small zone in London has been created for the people to live in, Don is the caretaker of this safe zone. The arrival of his children back to Britain spells disaster as a chance encounter with an immune victim of the virus unleashes another outbreak which the American forces are prepared to stop at any cost. 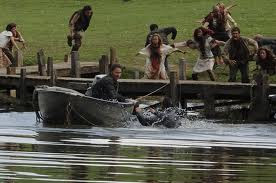 The opening sequence to 28 Weeks later is in my opinion one of the best I have seen. It wasn't until the final sequence in 28 Weeks Later that the action ramped up but here, within 5 minutes that familiar, fantastic signature song is playing and zombies...sorry, infected are everywhere. Don running across a field pursued by scores of infected remains the highlight of the film, expertly shot.  After this opening there is a brief period of calm before the film degenerates into pure action. I complained that there were a few too many quiet sections in Days but here with nothing but action I sometimes wished for some breathing space.

The main characters of Andy and Tammy (the kids) are very annoying and unlikeable. Everything bad that happens in the film is down to their actions so it is hard to feel any pity at all for them. The American army are shown as ruthless for the most part, perhaps a commentary on the 'war on terror'. They are far more concerned with stopping the outbreak then saving people, going to extreme lengths to contain the outbreak. Maybe having the holding area for non infected in such a weak, pathetic place was not such a good idea as one infected is able to pretty much turn everyone within moments. 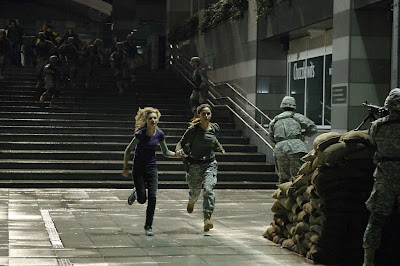 For the most part Weeks is a road trip film in so far as the characters have a goal they are aiming for and must encounter trials to get there. evading snipers, infected, gas attacks, helicopters and other dangers it really is quite action packed and full of lots of violence. Highlight for me was a helicopter flying at an angle so that the blades were slicing up bodies left, right, and centre. The direction is again quite kinetic, hand held, quick flicking shots much like Days. A trip into the London underground takes the film almost into a different genre as it becomes a first person film in the style of the Blair Witch Project and The Tunnel. It is kinda weird  and feels odd and out of place.

The soundtrack is fantastic, even better than Days but the plot is more bland and predictable, and with heroes you can't root for (I guess Jeremy Renner as Doyle is ok) and no let up in action it does get a bit too much on the non stop action side of things. Maybe the middle part of Days was not so needless after all. A worthy sequel regardless, maybe one day the rumoured 28 Months Later will be done to complete the trilogy!