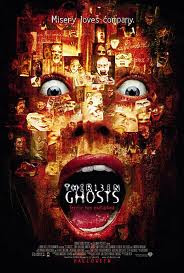 I could have sworn I had reviewed this before, but apparently not. A remake of the 60's film of the more sensible title of 13 Ghosts this film shockingly enough revolves around 13 ghosts.

During a ghost hunting expedition Cyrus; a wealthy ghost hunter is killed. Arthur Kritcos (Tony Shalhoub of Monk) and his family receive a video informing them Cyrus (Arthurs uncle) has left him a house as part of his will. The family are eager to check it out due to money troubles since their own house burnt down a year previous. They head there with Cyrus's smarmy lawyer, meeting Cyrus's psychic (posing as a repairman) on the way. Looking to steal Cyrus's fortune the lawyer accidentally sets off a trap that seals the group in the house and starts to release ghosts from containment units, one ghost at a time. Trapped in a house of angry, insane spirits Arthur must find a way to save his family. 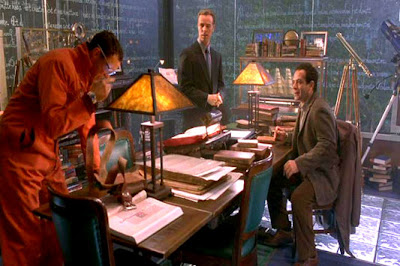 This is actually quite a entertaining film, I don't know why so many people look down on it, it is a lot of fun with some  great ghost designs and imaginative death sequences.  The house is a weird place made up of windows etched with Latin symbols that repel ghosts, and clockwork mechanisms that close off corridors and doorways periodically. Also is an abundance of special glasses that let the wearers see ghosts.

The design of the ghosts is the real highlight, each of the 13 have their own distinct look to them, and even a back story (never revealed in the film itself). You have a giant man wielding a hammer, nails embedded all over his  face, a torso wrapped in plastic sheeting, a suicide victim naked and covered in deep cuts, a young boy dressed as an American Indian with an arrow through his head and many more. They all look suitably creepy, having an over the top look, but a dark look to most of them. The anti ghost walls give an excuse for why they just cant immediately butcher the family and give some dramatic chase scenes down the many corridors of the house. 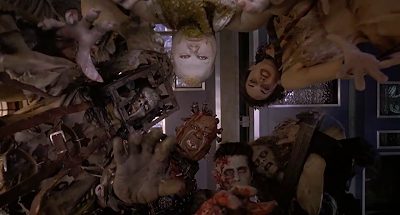 Head of the bad things I would have to say is the god awful title 'Thir13en Ghosts', up there with Scre4m, next is the totally out of place licenced song at the end, seems to be there as it is sung by Rah Digga who plays Maggie; the babysitter. Maggie is the very worst character, screeching and acting like an idiot the whole way though. She is the very definition of a token black character, and that is combined with her being the 'comedy' character. The family themselves are not at all likable, the daughter is a bubble head, the son annoying, the Dad is just plain miserable and unhappy (he did lose his wife in a fire I guess). Saving grace is Matthew Lillard as Dennis Rafkin. He is a psychic who has done some bad things while working for Cyrus and is partly to blame for the whole situation everyone is in. His path to redemption is very interesting, he starts off as annoying but by the films end he is pretty damn awesome. Lillard is great in the role.

The plot is a bit bare bones, mostly is just a survival tale, reminded me of the far more scary 'House on Haunted Hill' (1999). There are plenty of plot holes paved over for convenience, though some fun little later twists. The film cannot be said to be too scary, it has too clean of a look, some nice scenes of violence.  The most gory scene being a character sliced in half by a door, one half slides to the floor, the other half stays stuck to the other side of the glass door, looks great. Characters are assaulted by a variety of haunted weapons and get suitably beaten up (nice to see the annoying daughter get her face sliced up!). There is quite a bad looking CGI death later on, the early thousands were a bad time for CGI. 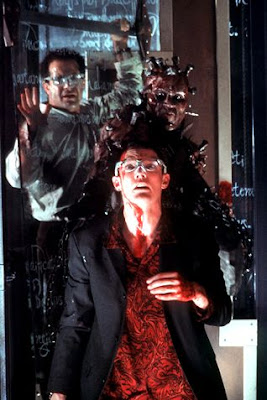 Thir13en Ghosts really is an under rated horror. It is almost scary in places, has a fantastic look and design and is not at all boring. Just let down a bit by mostly unlikeable characters and a bit of a silly plot.