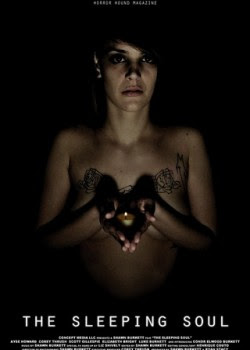 The Sleeping Soul is an indie film made by Concept Media, primarily Shawn Burkett. The film is 50 minutes long and mainly features just the one character.

On the way back from a graveyard visit a young couple are involved in a traffic accident with a drunk driver which claims the life of the girls unborn child as well as her fiance. One year later and the girls life is a mess, she is an alcoholic, on lots of medication and has reoccurring dreams about killing herself. As it comes up to the anniversary of her loved ones death strange things start to happen in her small flat and she comes to believe she is being haunted.

Ayse Howard as Grace James does a fantastic job of holding the film together, at least 40 minute of the film are her alone in her flat slowly going insane. She does a daily webcam entry and with this device she is able to have a reason to speak aloud. She comes across as supremely messed up, and visibly deteriorates as the days pass by. By the end she is gaunt, heavy bags under her eyes, hair a mess, she seems like a person in deep depression.

The Sleeping Soul does share some similarities with Paranormal Activity. Firstly the film is set over the course of a few days, each new time frame gets its own little intro credit giving the date, time etc. When the paranormal activity starts to occur Grace sets up her webcam to prove it is happening and that it isn't her hallucinating due to either mixing her meds with alcohol, or the chronic insomnia she is experiencing. This leads to some night vision style shots of her kitchen where most the activity takes place.

The effects consist mostly of doors opening and slamming and all look good enough, there is no violence, some implied which gave me the shivers. Some cool direction leads to some odd camera angles and shots that keep the plain apartment interesting, and there is some nudity if you like that sort of thing (personally it doesn't appeal to me at all).

I was surprised that I did not get bored. The Sleeping Soul starts off and ends badly, the graveyard scenes with the overly dramatic music were kind of boring truth be told but it is the rest of the film that is so effective. The flat the woman lives in is tiny, you get the impression she is a bit of a hermit, she never leaves during the films running time, and even after creepy things start to occur she never once contemplates escaping, I don't think it even crosses her mind. Her downward descent into despair is already well on the way, watching the tail end of this is quite engrossing.

Overall this is not a bad little film, held together by a strong performance from the lead actress (humorously bad typing sound effects aside), just let down by a weak start and finish.

Posted by Daniel Simmonds at 11:32