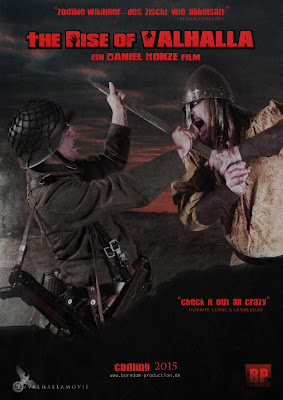 The Rise of Valhalla is an independent horror film currently being made in Germany by Daniel Konze. Much like The Bunker (2001) and Deathwatch (2002) this horror film takes place during one of the World Wars.

A group of Nazi's hoping to ensure victory in their war against the allied forces have opened the gates to Valhalla (the resting place of ancient dead warriors) and unleashed an army of zombie vikings to aid in their cause. However they can't be controlled and soon the group are killed. A bunch of resistance fighters stumble upon the ruined camp of the Nazis who had unleashed this plague and now must try to survive.

I can't say I have ever seen zombie Vikings before, the teaser trailer wasn't bad, will have to see if this is any good when it comes out! I quite enjoy zombie films that take place in the past, makes for a different experience! The teaser poster says this is due for release in 2015.

Posted by Daniel Simmonds at 06:17