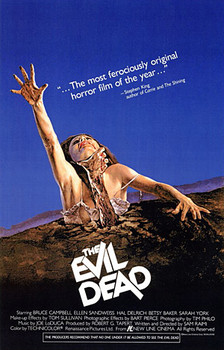 Having seen the remake of Evil Dead I had to go back and watch the original. The last time I saw it was many years ago when I watched it three times in a row one awesome day, it is one of my favourite horror films, I even have the poster on my bedroom wall. How does it hold up revisiting it now?

Five friends head up into the woods to an old cabin for a holiday. In the cabin they find a tape recorder, a strange ritualistic looking dagger, as well as a creepy book full of images of demons. Playing the tape they hear a professor talking about discovering an ancient book; the 'Necronomicon' that legend says can summon demons to inhabit the souls of the living. The recording also includes the incantation said to summon the evil dead. True to form it actually works and the horror that claimed the life of the professor is now to unleash itself on the poor friends. 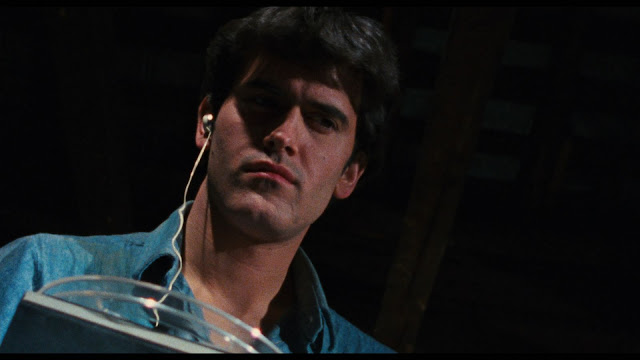 The Evil Dead is certainly a true horror classic, the first film living legend Bruce Campbell got to star in. I remember as a teen watching this and finding it horrific, the 'Deadites' (humans possessed by demons) are relentless, poor Ash (Bruce Campbell) is forced to repeatedly attack and kill his friends, as soon as one is down another one appears. The idea of one long relentless terror filled night used to fill me with dread. Later on I came to see just how funny the film really is, it has a vein of jet black humour running throughout, everything from the over the top scenes of violence to corny dialogue and more gives comedy that may be missed on an initial viewing.

The special effects used on The Evil Dead are really very well done with director Sam Raimi using some novel camera shots. The 'Evil Dead' itself is represented by a camera zooming through the woodlands with a great deep zooming noise used, extreme close ups (such as a wonderful scene between Bruce and his girlfriend) and the iconic shot of the camera rolling across the ceiling. Raimi is not afraid to make the camera a part of the film, adding sound to its movements. 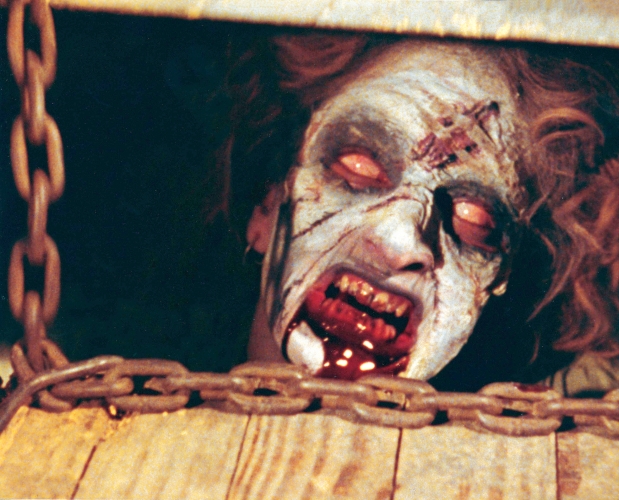 A lot of violence abounds in this film, more than I remember, there is of cause the controversial tree rape sequence that is very well shot, also some gruesome shots that nearly hold up today such as a hand severing, and a pencil jabbed into a characters ankle. The Deadites look grim, heavily made up with contact lenses and lots and lots of makeup. Being a scrappy film there is lots of inconsistencies with the amount of blood on characters clothes varying between scenes. Plenty of blood also, a fantastic sequence in a cellar where the walls spurt out gallons of the stuff, a dying Deadites face exploding in a fountain of gore and the camera itself getting coated in a layer of blood at several points.

The plot is really just an excuse for the horror to occur, there is not much depth to the characters. Scotty is the joker, Shelly his girlfriend, Cheryl the sister, Ash the reluctant hero (after tough guy Scotty is defeated), and Linda; Ash's girlfriend. With such a small cast of just five characters, and the small location of the cabin the thrills come thick and fast The Evil Dead holds up well, it really is an impressive little film that is creepy despite the bad acting, fantastic direction, awesome camera work, has Bruce Campbell in it, and features one of my favourite horror movie endings of all time. The very definition of a classic!

Update: 09/12/2020:
I have recently got the Evil Dead trilogy of films on Blu-ray so felt a rewatch of them was in order. The Evil Dead remains a very strong horror film, some of the effects and make-up are not as good as I remember, but then I am watching it on the highest quality transfer yet. Still gotta love that fantastic ending shot. 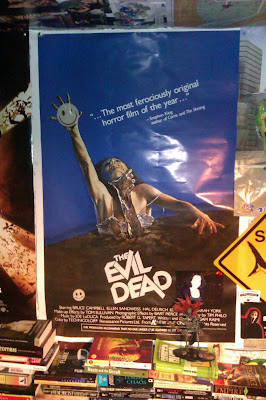 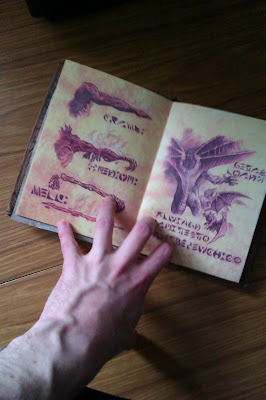