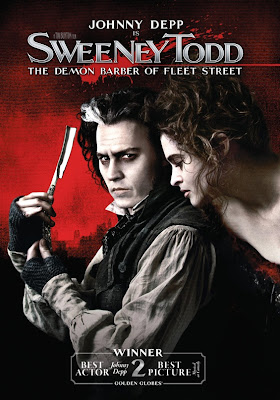 Sweeny Todd is yet another Tim Burton film starring Johnny Depp and Helena Bonham Carter. This one is a musical that is based on the popular theatre show of the same name.

London barber Benjamin Barker (Depp) is arrested on false charges and sent off to a penal colony in Australia by crooked Judge Turpin (Alan Rickman) so that the judge can have his wife Lucy for his own. Fifteen years later Barker returns  under the new name of  'Sweeny Todd' in order to set things right. Discovering his wife Lucy has committed suicide, and that his daughter is now a ward of Turpin Sweeny swears revenge. Biding his time he goes into business with a pie maker Mrs Lovett (Carter) and they create a plan to make meat pies out of victims that Todd kills on his barbers chair. 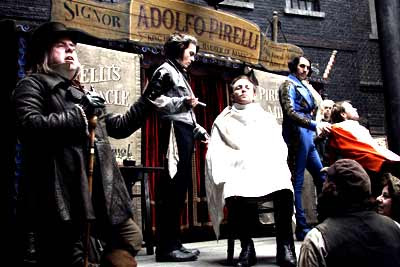 The look of this film is traditional Burton, it stars his favourite actors and has the whole gothic, dark Burton thing going on. The music though is not the usual Danny Elfman score though as the songs are taken from the Stephen Sondheim musical. For the most part the songs are misses in my opinion, Todd is a dark character but he doesn't really get many songs about himself, far too many songs are whiny, soppy or a combination of the two.

The main plot is not bad, Todd's thirst for revenge has twisted him into quite the monster. Arriving in London he doesn't appear that bothered to find out his wife is dead, or that his daughter is under the guardianship of his mortal enemy Turpin, he is driven to get his revenge and that is all that keeps him going. The sub plot involving a romance between Anthony (a young sailor who arrives in London with Todd) and Todd's daughter Johanna is tiresome, Anthony is a very irritating fresh faced idiot who thankfully takes mostly a back seat. The whole turning people into meat pies story makes sense for Todd and for Mrs Lovett, he sees life as futile and worthless and so has no qualms at ending peoples lives, while Lovett is driven by simple greed. 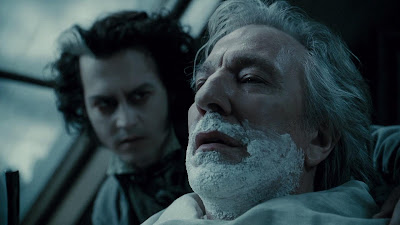 Sweeny Todd is a very bloody film, mostly due to Todd's throat slashings that see fountains of blood flood out of his victims. Not blood for bloods sake as it represents Todd's only way of getting release from his violent tendencies, he needs the violence otherwise he would implode. Depp is excellent as Todd it must be said even if he is an unsympathetic character which is at odds with his plight for revenge, he is just not likable, no redeeming qualities. Elsewhere Sacha Baron Cohen is fantastic in his small role as fraudster Pirelli, he steals all his scenes. Rickman and Timothy Spall also excel as the villains of the piece fitting comfortably into their roles.

I did enjoy this film, I thought it looked great and had some good songs and scenes of gratuitous violence, just overall I was not blown away due to a glut of weak songs and weak singers and the whole Burton thing is just feeling quite old nowadays.

Posted by Daniel Simmonds at 12:36