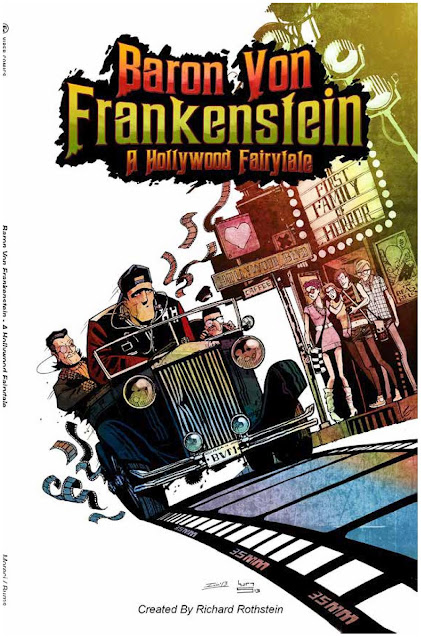 Baron Von Frankenstein: A Hollywood Fairytale is a digital comic book that features all the old monsters of Hollywood.

In the world of the comic all the old Hollywood monsters we know and love are actually real, the wolfman, Frankenstein s monster, Igor, the mummy and more all exist but have faded into obscurity a bit now that the golden days of classic monster movies has passed. With all CGI and special effects all the rage they struggle to find work, reduced to doing menial jobs to pay the bills. Advertising agent David Sippiro wants to make a series of adverts featuring the monster likeness in computer generated form, saying it will make them rich, but the monsters leader Baron Von Frankenstein doesn't want to sell out. Later that day he mysteriously vanishes. Despite the other monsters not caring, and being suspected of the disappearance themselves, Igor and Frankenstein's monster decide to turn detective and find their beloved master. 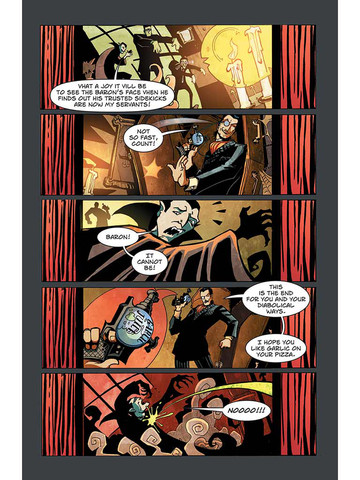 The look of this comic is fantastic, it really has an old school hand drawn style to it, something that is sadly missing nowadays as everything is all neat and computer created, this has the feel of a comic from the 90's, something that is much appreciated. The panels are full of detail, incidental and otherwise, a later driving sequence is full of chaos which the nattering characters driving the car pay little attention to, reminded me a bit of Tank Girl.

Baron Von Frankenstein himself is unlikeable; arrogant, proud and annoying but thankfully the comic focuses on Igor and Frankenstein's monster. Frankenstein's monster is fantastic, a teen, he is early on seen (always emotionless) wearing teen clothes, listening to music on headphones, he only talks in grunts but Igor is able to translate. A grunt could be a simple response or it can elicit a long reply out of Igor, really is the comedic highlight of the thing The other monsters are not featured as much, they are all portrayed as normal people who just happen to be monsters. 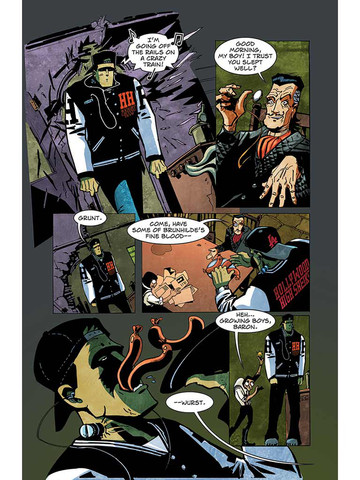 The plot is interesting if a little simple, the kidnapper is revealed early, would have been better to be kept guessing as the most intriguing part was the bit before the reader is shown who was responsible. Still it moves along quickly and is well told.

A fun comic, one that I would recommend, it is a light hearted comedic one though, so don't go in expecting scares! Baron Von Frankenstein: A Hollywood Fairytale was released a few weeks back on Apple ibooks, Amazon Kindle, Nook and Kobo, well worth a look at, old school entertainment.