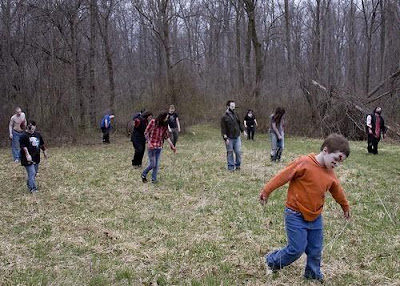 I have made it my mission to always chronicle any zombie dream I happen to have. Nowadays they are few and far between. I was lucky enough to have one last night so here it is in all its half remembered glory...

It was the start of zombie apocalypse, there were many humans running around in panic. I was on a big open field near some woods, I ran as fast as I could, random stumbling corpses grabbed in my general direction as I sprinted past. I got to the woodlands where there was a big muddy hill, very steep. I did my best to run up it but was moving so slowly that I was afraid I was going to get grabbed.

I got to a weird sky bridge that I had to crouch down to enter, the floor was made of panels of reinforced glass, the whole structure was very old and in a state of disrepair, I had to move slowly to avoid breaking the  weak glass floor. Many other survivors were also making their way through the structure, we were all heading in the same direction.

I must have got bitten because I was now a zombie, but I was just an actor pretending to be a zombie. I bit into someone's leg, then realised I should only be pretending to bite them as it was all make believe. After this I crawled on a bit and the shot ended, I was disappointed in my performance.

That's is all I remember, I guess the acting part of the dream come from the face I am thinking about The Walking Dead lots at the moment. Not the best zombie dream I have had, but still welcome.
Posted by Daniel Simmonds at 05:11