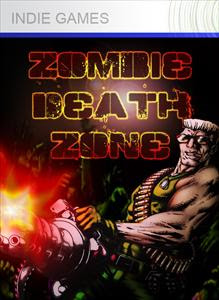 I booted this up expecting yet another terrible X-Box Indie zombie game. First I was attracted by the cool animated comic book style opening sequence, soon I was wooping with glee. There is still life in the twin stick zombie shooters!

The story is simple; there has been a zombie infestation so an army of clones have been dispatched to deal with the threat. Only problem is that each clone can only live for 60 seconds, their life can be extended by collecting energy cells that some of the zombies carry but other than that there life is short and sweet. 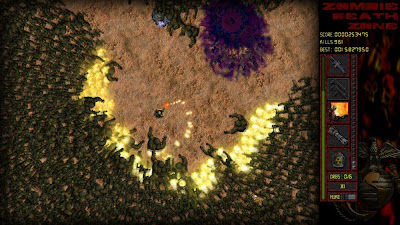 Wow! This game is so much fun, I expected to do a quick play of the demo and then write a harsh review but this was fantastic. 28 goes in a row later and I have finally tore myself away from it. It is such a simple concept; survive for 60 seconds. There are no alternative play modes, no lives, just fun, tense action.

From the off you are swarmed by literally thousands of zombies. You can't afford to hold back, you have to wade into them to collect the precious energy cells, one touch and your game is over. Each 60 seconds you have access to a bunch of limited use weapons. First is the twin uzi's, next is the very helpful flamethrower, then a mini gun, finally a nuke which clears the screen. Dotted around the overhead level are barrels that explode if shot, as well as nuke symbols. Collect three nuke symbols and say bye to the zombies. 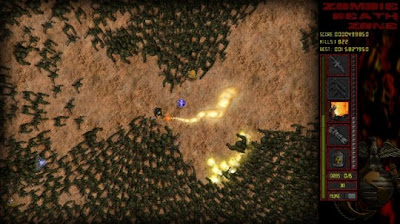 Zombie Death Zone succeeds as it is a very fun score attack game, the limited time means you have no choice but to go crazy on the ghouls. Minor irritation is that the edges of the arena are not clearly defined, everything outside the arena is just slightly darker, can be annoying to die due to not realising you had reached the outer edges.

At 80 Microsoft points I snapped this up right away. I feel weird for saying this but this is one X-Box Indie game that doesn't suck! Would have loved a two player mode for this but you can't have everything. Give it a go and prepare to become addicted.