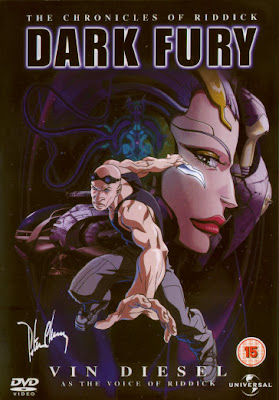 Dark Fury bridges the gap between Pitch Black and The Chronicles of Riddick, it was made by Peter Chung (who directed the Animatrix; a film I refuse to watch for reasons unknown to me). It is an animated film, but one that uses quite a lot of computer generated effects as well.

Dark Fury takes place extremely soon after the end of Pitch Black. The ship Riddick, the preacher guy and Riddick wannabe teen girl Jack are in is captured by a giant mercenary spaceship. The ships captain Antonia Chillingsworth recognises Riddick and wants to have him as part of her 'art collection'. She collects criminals and has them in a state of suspended animation as exhibits, each second for the prisoner lasts an hour, a fate worse than death. Riddick is to be the centre piece of her exhibit but first she wants him to prove his strength in a battle with alien monstrosities in a fighting pit.

At 33 minutes long this is a very short film indeed! Luckily I did not pay full price for this, I would have been a bit miffed if I had done. The animation is very good, is stylish and detailed. As a lot of modern animations do this melds computer animation with traditional animation, it does jar quite a lot, they don't gel well at all but does give it some charm.

I found the notion of a huge ship containing thousands upon thousands of mercenaries in cryo sleep to be interesting, the whole art collection aspect was also real interesting. Apparently it sets up the character of Toombs  for The Chronicles of Riddick. His inclusion here was confusing as I thought him dead only for him to turn up fine. The battles with the aliens are really trippy to watch. One battle takes place in pitch black with 2 swirling creatures that had rainbow coloured tentacles, while later on some fleshy being made out of what seems to be brain gave a creepy vibe. Riddick is just as bland as in the games and film previously but seems to have more compassion for his fellow survivors, such as giving himself up when Jacks life is threatened. 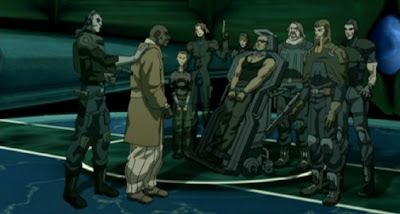 As a stop gap the film is not great, as a stand alone story it is interesting and could not have been replicated in live action without tremendous cost, fun to be had here, just subtracted a bit by bland characters. How a series was made out of Riddick I do not know!